“BAREFOOT IN THE PARK” at The Old Globe 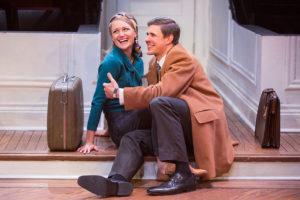 Corie Bratter is a free spirit. She thinks her husband is a stuffed shirt. He thinks she’s wild and impulsive; after all, she wants to go running “Barefoot in the Park” in the dead of New York winter.

They’ve only been married for six days, but already, there’s trouble in paradise: their first fight, which leads to threats of divorce. They’ve haven’t yet figured out what every spouse comes to know sooner or later: It’s all about compromise. And learning how to juggle relationship, work, sex and a 6th floor walkup with no heat and a hole in the skylight. The wheeze-inducing climb is a running joke in the play.

“Barefoot in the Park” is early, 1963 Neil Simon, inspired by his first of five marriages. At The Old Globe, a few nips and tucks have been made, which keeps the play from feeling totally dated. Not very feminist, but it’s still funny. Sitcom funny, which makes it apt that the leads have more current credits in TV and film than theater.

But perky Kerry Bishé and endearing Chris Lowell have great comic timing and wonderful chemistry. USD/Old Globe MFA alum and frequent Globe returnee Jake Milgard nearly steals the show as the Telephone Repairman, hilarious in each of his short but significant scenes. John Garcia gets a few panting gasps as a beleaguered delivery man.

Mia Dillon and Jere Burns are amusing, both separately and together, as Corie’s mother and the couple’s wacky upstairs neighbor, a penniless bon vivant who has a reputation as The Bluebeard of 48th Street (and speaking of streets, since when is 48th considered the Upper East Side?).

Director Jessica Stone, who, with a crack design team, brought side-splitting stage business to “Ken Ludwig’s Robin Hood” at the Globe, employs some of that magic here, too. In one exhilarating moment, furniture, a plant and a rug appear with inventive alacrity, making excellent use of the space above and below the stage.

The laugh’s the thing in this show, which is sweet summer fluff. Call it cotton candy for grownups.