“MUCH ADO ABOUT NOTHING” at The Old Globe 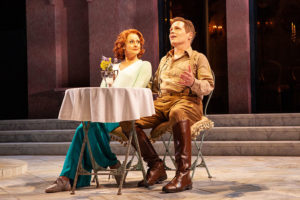 That wittiest, quippiest of couples is at it again. Beatrice and Benedick are back at The Old Globe for the 13th time.

In Shakespeare’s “Much Ado About Nothing,” one of the greatest romantic comedies ever written, the linguistically acrobatic antagonists repeatedly swear they can’t stand each other —  until they’re tricked into embracing mutual devotion and marriage.

In a parallel love story, young Claudio is more malevolently tricked; he rejects his fiancée at the altar, in the grossly mistaken belief that she has been unfaithful. A ridiculous, bumbling constable helps untangle the intrigue and ensure a happy ending for all.

Three-time Tony Award-winning director Kathleen Marshall is back at The Globe, too, creating another production as cheerful and beautiful as her “Love’s Labor’s Lost” two years ago.

Instead of 16th century Sicily, the action takes place in the 1930s, on the sun-splashed Italian Riviera, underscored by Cole Porter tunes, played by a skillful onstage guitar and violin. One new, jazzy melody was set to Shakespeare’s lyrics by acclaimed Broadway composer Stephen Flaherty.

The two-story pink villa is flanked by stands of cypress trees, perfect for hiding behind in the play’s funniest scene of staged gossip and chicanery.

Manoel Felciano’s dastardly Don John isn’t as evil and villainous as some, though his ‘jarhead’ look and Nixonian curtain call capture attention.

On the silliness side, Fred Applegate’s Dogberry, the malaprop-spewing policeman, is equally understated, though his most heinous language-mangling did get some laughs. So did the moment when Leonato inadvertently got hooked to his chair during the performance I attended. He was finally extricated by Benedick, to the amusement of all – onstage and off.

The menacing shadows in this “Much Ado” aren’t all that dark, and the low comedy isn’t that side-splitting – but the sum total still feels thoroughly satisfying on a warm summer night under the stars.