“SEIZE THE KING” at the La Jolla Playhouse 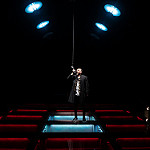 Watch “Seize the King” at the La Jolla Playhouse and draw your own conclusions.

Internationally acclaimed playwright and hip hop theater pioneer Will Power is riffing on Shakespeare’s “Richard III,” re-conceiving the brutal rise and fall of the power-mad medieval monarch for a modern audience. He insists that he isn’t making any particular parallels, but the present is constantly, eerily, informed by the past. Here are a few salient quotes:

“Power is what I want. I need my name on everything.”

“One by one will I remove those who stand in my way.”

“A difference there is between not the whole truth and a lie.”

To sum it up, quoting the play: “King Richard III is more alive today than ever he was.” He was a con man with insatiable ambition and relentless paranoia, a grand manipulator who divided and corrupted a nation. His story could apply to any extreme socio-political climate, any country grappling with Good and Evil, trying to evade the rocky road to tyranny.

The playwright is masterful at melding the old with the new – iambic pentameter rubs up against rap rhythms and American colloquialisms. The talented and diverse cast of five is backed by a magnificent percussive soundscape. Noted San Diego jazz drummer Richard Sellers should be counted as another character in the intense, intermissionless, arena-staged world premiere.

This isn’t Shakespeare’s version of King Richard III, and you don’t need to be familiar with that play. But if you are, it magnifies the genius of what Power has done in re-framing and re-imagining the story.

Associate artistic director Jaime Castañeda, who is sadly, about to leave the Playhouse, helms this excellent ensemble. Jesse L. Perez is marvelously malevolent as Richard, slyly, smirkily seductive and devious. Lucky for us, the actor has just moved to San Diego to become head of the MFA program at USD.

His outstanding interactions with his multiple-character cast-mates are highlighted by the era-spanning costumes and eye-popping lighting design. The stunning final image elicited a collective gasp from the audience.

This is urgent, propulsive, theater, lyrical and metaphorical, literally drummed into your head and heart.