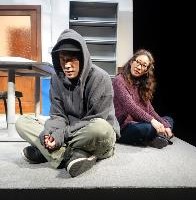 Things are pretty hairy on college campuses these days – what with racist pranks, date-rape, even open-carry gun laws at some schools.

In the world premiere, “Office Hour,” at South Coast Rep, playwright Julia Cho is wading into the deep, dark waters of campus terrorism

English major Dennis is scaring his creative writing teachers and fellow students. He sits at the back of the room, hunkered down in shades, a baseball cap and a hoodie. He talks to no one, and his angry, mangled writing is all about sex, violence and violent sex.

Two professors have already thrown up their hands, and they dump the problem in Gina’s lap. She’s only adjunct faculty, but she agrees to talk to Dennis during her office hour.

It isn’t easy. Withdrawn and damaged, he refuses to respond. Gradually, by revealing her own past and personal stories, and by role-playing a Tiger Mom, she opens a slight crack in his defensive shell.

Like Dennis, the mass murderers at Virginia Tech and UC Santa Barbara were Asian Americans who felt like powerless outsiders. So the setup is hyper-real, but some of the alternate realities veer off into the realm of dread and fantasy. There are too many false endings, and the final one feels unresolved and anti-climactic.

Not that anyone expects easy answers to these problems of disturbed kids who refuse to seek help. But though we may not feel satisfied at the end, like Gina, we certainly have been frightened and traumatized.

We walk away unnerved and distraught. And maybe that’s the point – to goad us into serious discussion about our post-911 fear and paranoia, precipitated by the effortless access to guns and the limited resources available to concerned faculty and students.

Cho’s short, intense one-act is tautly and suspensefully directed by Neel Keller. The cast is strong, though the two additional teachers seem expendable.

This show belongs to Sandra Oh, the gifted performer on stage, screen and “Grey’s Anatomy.” She’s terrific, and the anxious, super-charged time she spends with Dennis – expertly portrayed by Raymond Lee — is positively nerve-jangling.

Could Gina’s empathy be misguided, even risky, in such an after-hours closed space?

Maybe your post-performance conversations will come up with better solutions than even this provocative playwright could conjure.