“THE ELEPHANT MAN” at Backyard Renaissance and Oceanside Theatre Company 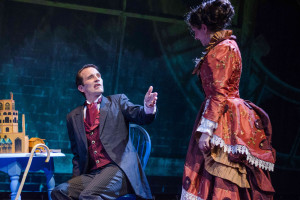 There are dramatic tragedies, and there are real-life tragic stories. Joseph “John” Merrick had one of the latter kind – a heartbreaking tale of neglect, abuse, pain and abandonment.

His mother died when he was young and, rejected by his father, Merrick wound up in one of those notorious Victorian London workhouses. Possessed of some horrific deformity (still unidentified) that rendered him monstrous to look at, he was taken in by a huckster, who displayed him as a sideshow freak, treating him horribly and ultimately absconding with Merrick’s share of the money. He was beaten up some more, before he was discovered by Frederick Treves, a young surgeon at London Hospital.

Becoming Merrick’s protector, tutor and bridge to the outside world, Treves, based on the diaries he kept and the book he later published, learned as much as his avid pupil. The enigma of Merrick compels Treves to question everything he knew – medically, philosophically, religiously and humanistically.

These competing forces are brought to the fore in Bernard Pomerance’s 1979 Tony Award-winning drama, “The Elephant Man.” That was the moniker by which Merrick was known in his “curiosity exhibition” days, due to his massively oversized head (which prevented him from lying down to sleep) and his grossly misshapen form.

The dramatic convention, when performing the title character, has always been to eschew any makeup or prosthetics; the actor merely distorts his posture, face and speech to convey the hapless but sensitive, knowledge-hungry and romantic soul trapped within a terrible deformity and fate.

The latest local production of the provocative play is an excellent collaboration between two fairly new and ambitious additions to the San Diego theater scene: Backyard Renaissance Theatre and The Oceanside Theatre Company (OTC). Since the one year-old Backyard doesn’t yet have a space of its own, but the four year-old OTC does, the production takes place at the 198-seat Sunshine Brooks Theatre in Oceanside, with co-direction by the two company artistic directors: Francis Gercke (Backyard) and Christopher Williams (OTC).

While the episodic, somewhat choppy play is not wholly satisfying, the production is forceful and the central performance is mesmerizing. At the outset, we watch in awe as Francis Gercke transforms himself into The Elephant Man. Handsome and intense, typically a rather antic performer, Gercke becomes focused, controlled, painfully slow-moving and positively unrecognizable – both physically and vocally. He contorts his body, mouth and speech, raises his pitch and portrays an achingly calm, surprisingly thoughtful man who had everything going against him (including society), yet he maintained an open mind and heart.

The arguments made by the gawking high-and low-born populace, the hidebound church, the business-oriented hospital administrator and the conflicted Treves, are not as forcefully made as they could be.

Interestingly, all involved seem to see something of themselves in Merrick. But the production doesn’t sufficiently underscore this point, or explore the multi-layered subtext of the various characters. Even Treves (the talented Nick Cagle, so marvelous in “Uncanny Valley” at the San Diego Rep last year) isn’t tormented enough: his compassion battling with his medical fascination (and publication potential) and his need to lay down the ‘laws’ of Merrick’s living arrangements in the hospital.

We need to see more of the conflict in Mrs. Kendal (Jessica John), too; she’s the actress who, at Treves’ urging, agrees to ‘act’ normal with Merrick, and then becomes intrigued by him and his unique perspective on the world. Then she, too, abandons him. Still, Cagle and John put in powerful performances, and the multi-role-playing ensemble is strong.

The set (Ron Logan), costumes (Roz Lehman) and lighting (Karen Filijan) are effective. The original music (Joe Huppert, also responsible for the sound and projections) is most noteworthy in its mournful cello opening. The frequent blackouts in the spasmodic first act steal in from the side, creating the disorienting sense of a Power Point presentation.

Each production of the play (OnStage Playhouse in 2012, North Coast Rep in 1998) seems to highlight one element of the story. Some are gut-wrenching; others, tear-jerking. This time, the intensity and verisimilitude of the lead performance, coupled with the photo projections of the real Merrick, render the drama difficult to watch at times. Difficult to watch, hard to turn away from – which was, presumably, the plight of poor Merrick’s short life (1862-1890). He died at age 27, attempting to lie down to sleep, like a normal person. Or maybe, some think, he intentionally ended his tragic life.

What remains clear is that, like those Victorians, we probably all have something to learn from Mr. Merrick.