“THE DOYLE AND DEBBIE SHOW” at Broadway Vista Theatre 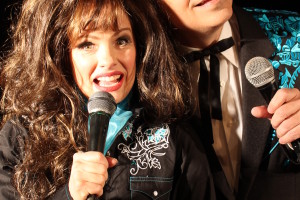 Doyle Mayfield has had a rough ride. He’s already been through two Debbies (two of his four wives) and now his third Debbie, the one he thought would catapult him back on top of the country western charts, is gettin’ ready to skedaddle. But they’ll do one last “Doyle and Debbie Show” for our delectation (‘we’ being a Nashville audience).

It just seemed right to see a country act in the week that legend and icon Merle Haggard died (he even gets mentioned twice in the show). But though the talent is genuine, this show is really a spoof of every country western hardscrabble story you’ve ever heard – onstage and off.

During the performance, Doyle gets drunk and has an emotional meltdown: some cockamamie tale having to do with the scalp of his dead father. And besides said scalp, he’s dragging around a whole lotta bad baggage: DUIs, theft, fraud and a few other unsavory behaviors – maybe even murder.

His new Debbie is a single Mom with three kids (who are outside, sweltering in the car).

So, kinda Trailer Trash, who sing some pretty funny, satirical, trashy songs (some of whose titles or lyrics are unfit for a family website). In these goofball ditties, Talladega rhymes with Winnebago and “Fat Women in Trailers’ take “Blue Stretch Pants” to the limit for some “Stock-Car Love.”

The between-song banter and dialogue is cheesy and often lame, but these performers take every minute seriously, and we willingly get caught up in their wacky, low-end world.

It’s a total hoot to watch Phil Johnson and Eileen Bowman do their thang (as they did in the Lamb’s Players production of another silly two-hander, “Pete ‘n Keely,” three years ago) – along with hilarious, near-mute, scene-stealing Douglas Davis as their backup singer, sometime musician (playing mouth-harp and jug), and onstage laptop music button-pusher.

The singing is great, and some of the songs are pretty wild, like the nutty one about the guy who writes his gal’s name in gold, in “The Snowbanks of Life.” Or the up-tempo number Doyle wrote “from a woman’s perspective”: “Just Keep Me Barefoot and Pregnant.”

A little of this goes a pretty long way, and one act would suffice. But writer/composer Bruce Arntson goes the whole hog (2 acts, 2¼  hours), and so do the ever-inventive founders of the Broadway Vista Theatre, Randall Hickman (producer, director; set, lighting and costume designer) and Davis (producer, actor, set construction maven, box office manager and zany intermission raffle emcee – with the usually tacky merchandise being all Doyle and Debbie-related items this time).

The set is pure cornpone: a flower-bedecked rural porch, with rockin’ chairs and hay bale. The (intentionally canned) music will have you tappin’ your toes and titterin’ a bit.

See it for Doyle and Debbie. See it for Phil and Eileen and Doug – and Phil’s bootpolish-black mega-pompadour. Heck, see it for Merle.