“NOURA” at The Old Globe 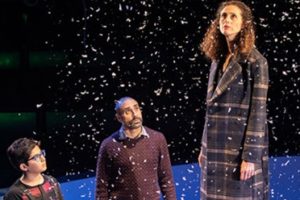 “Noura” isn’t a ‘women’s play,’ per se. But it will pierce deep into the soul of women.

Loosely inspired by the central character, Nora, in Henrik Ibsen’s 1879 masterwork, “A Doll’s House,” this 2018 drama shares, sadly, some of the same concerns — 140 years later. That story concerned doors bolted and unlocking.

Women have been straining against the constraints society imposes on them — pretty much since there were women on earth.

Playwright/actor Heather Raffo (an alumna of the Old Globe/USD Shiley Graduate Theatre Program), herself an artist, mother and wife, is acutely aware of the struggles to establish and maintain an individual (or a multi-faceted) identity.

Her background — her father was born in Mosul, Iraq — adds a whole other layer (or ten) to her musings on the role(s) of women.

Raffo’s searing play, which laces the drama with humor and heart, is having its West coast premiere at The Old Globe, barely a year after its Off Broadway debut.

Noura  is a mother, wife, former architect and Chaldean Christian native of Mosul. She and her husband, Tareq escaped to the U.S. eight years ago, leaving behind a book-filled home and a culture destroyed, 3000 years of history turned to rubble:  books, monuments, artifacts, buildings, families.

Now, it’s Christmas Eve in Queens, New York. Noura, Tareq and their son, Yazen are celebrating the arrival of their freshly-minted passports and official U.S. citizenship. To create a sense of family and partake in Iraqi treats, Noura has invited Rafa’a, a lifelong friend from Baghdad, and Maryam, a young orphan she’s been sponsoring for years, and finally helped bring to America.

The only thing that turns out as expected is that Yazen, now sporting a new American name, Alex, will get his much-desired PlayStatioin. Everyone else’s world will be turned inside out.

Secrets will be admitted and unearthed, harsh judgments will be leveled, and relationships will unravel.

Like all refugees, these folks are trying to fit in and belong, without losing sight of who they are; establishing a balance between assimilation, integration, embracing a new culture and maintaining or leaving behind the old ways.

The actions of the two women will be questioned, and they’ll be shamed. Each will steadfastly try to assert her own identity and individuality. And Noura will finally confront the “silence” (a running theme through the riveting 95-minute play) that has plagued her since she left Iraq.

She feels complicit in the decimation of her town and her culture. What would have happened, she wonders, if she had said more, done more?

She begins to talk not in the circularity and obliqueness of Arabic or Aramaic linguistic style, but in the direct, honest, confrontational manner of English — with devastating consequences.

The production at The Old Globe is outstanding. The scenic design (Andromache Chalfant) is a marvel of messiness and incompletion — still no sofa in their loft, after nearly a decade — with perplexingly, an upside-down, suspended Christmas tree. The house is surrounded by cutaway concrete walls that Noura repeatedly climbs to sneak a smoke outside, standing in the snow and contemplating who she is or has become. Friendless and isolated, she admits that she is in exile from herself.

Three of the five superb actors are Iraqi. There is also a cultural consultant (Noora Hammi) and a Voice/Dialect coach (David Huber). The meticulous attention to detail by director Johanna McKeon and her creative partners makes the play feel achingly real.

Every performance is marvelous. We feel somewhat voyeuristic, being brought so close, so deeply into one extended family and the thoughts and minds of its members.

It’s a triumph of Raffo’s writing that we experience such discomfort with the revelations and interactions — about love, sex, tradition and self-awareness.

Lameece Issaq is magnificent as Noura, displaying a panoply of emotions and confusions, self-doubt and self-assertion, anger, tears, guilt, self-recrimination and even, toward the end, shock.

As her husband, a physician long forced to work in a Subway sandwich shop to support his family, Mattico David is warm and funny at first — until his affable Americanization is pulled back to reveal a s hard-edged, hidebound, disparaging, fundamentalist interior.

Fajer Kaisi’s Rafa’a serves as a fulcrum of the family, but amid the avalanche of truth-telling, he uncovers some unexpected admissions of his own.

Isra Elsalihie makes Maryam strong and determined, a survivor who bears the internal scars of a punishing history, but is unwavering in her determination to take full control of her life in a new land.

Giovanni Cozic is cute and fun as Yazen/Alex, a kid who’s very American in his behavior, but clearly steeped in the value of his culture; he pointedly notes that his parents only speak Arabic when they don’t want him to understand.

There are many universals here, about women, family, marriage, aging, change.

This particular family also embodies many elements of the immigrant experience (sacrificing, adapting, attempting to fit in and belong), with added, freighted layers. As refugees, they witnessed unspeakable horrors. As Iraqis in America, they’re often shunned or rejected, assumed to be Muslims even though they’re Christian. (Rafa’a, an obstetrician, is a Muslim; some patients refuse to let him deliver their babies).

At the ambiguous, enigmatic ending, Noura stands in the snow (drifting down in her own home), perched on a personal precipice. It’s not clear what her next move will be, but I would not be surprised to hear that fateful Nora-sound of a slamming door.