“ALMOST FAMOUS” at The Old Globe 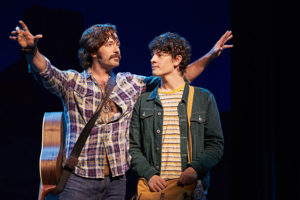 The 2000 film, “Almost Famous,” told a version of writer Cameron Crowe’s own story: his formative years (Crowe attended University of San Diego High School AKA Cathedral Catholic), his writing about music for underground papers, his meeting with legendary rock critic (and former San Diegan) Lester Bangs, and being unleashed, at age 15, as a professional rock journalist, and the youngest-ever contributor to Rolling Stone magazine.

Crowe would go on to pen other seminal movies — “Fast Times at Ridgemont High” (set at Clairmont High, beginning as an article for Rolling Stone) and “Jerry Maguire” — which earned him an Academy Award and became cult classics.

It makes perfect sense for Crowe to return to his old San Diego stomping grounds to mount this new musical version of his rock-loving life — to premiere the show at The Old Globe.

And a massive production it is, with huge, constantly changing, highly imaginative sets (Derek McLane); watch the onstage assembly of a bus and a plane! The lighting (Natasha Katz) is eye-popping and the sound (Peter Hylenski) is mostly crisp. The costumes (David Zinn) change on a dime, and thoroughly capture the ragtag, hippie-glam sense of the ‘70s.

The centerpiece is William Miller (terrific young Casey Likes), who’s resigned to the fact that he’ll never be cool. He’s pushed around at school (“1973,” a high-energy opener) and, because he’s years younger than everyone else, he’s ridiculed for not being fully sexually developed.

His father has died. His college-teacher mother, Elaine (Anika Larsen, strong, but not quite the force of nature Frances McDormand was in the film) is stern in her love, controlling of her children, and terrified of sex and drugs… and the music that inevitably leads to them.

William and his sister, Anita (Emily Schultheis, adorable in a still-underwritten role) must stash their albums away. When Anita has had enough of her mother’s constraints and restrictions, she runs off to San Francisco, bequeathing all her LPs to her little bro.

William has already developed an encyclopedic knowledge — and devout adoration — of rock music. He’s written music columns for school and underground papers when he shows up at the San Diego Sports Arena (now Pechanga Arena) to snag some rocker interviews.

That’s when he meets the Band Aids (“Who’re You With?”), young women who are equally devoted to music and particular bands. In the musical, they’re clearly distinguished from groupies: “Groupies sleep with rockstars for the thrill; we’re here for the music. We inspire the music.”

The rockstar of the Band Aids is Penny Lane (stunning, long-legged, sexy, talented Solea Pfeiffer), who’s reportedly had 14 songs written about her. “She’s like the sun,” say her gal-pals. William, of course, is blinded by the light.

He worms his way into the stadium, and miraculously snags a story for Rolling Stone, about the up-and-coming (fictional) band, Stillwater, whose lead guitarist, Russell Hammond (irresistible Colin Donnell) is having a thing with Penny, but he also has an ex-ex wife who makes a later appearance. Complications all around. Also competition with the lead singer, Jeff (Drew Gehling, a fearsome rocker).

Though Lester Bangs (overeager Rob Colletti, who bellows and overacts like he’s still playing Dewey Finn on tour in “School of Rock”) keeps telling William not to get close to the talent or the girls, and to maintain honesty and “unmerciful” objectivity, William finds a home and friends for the first time in his life. And in this ultimately uplifting coming-of-age story (sex, drugs and R&R notwithstanding), he finds his place, his niche, his life’s work, his personal and professional integrity, and people who genuinely care about him.

The message is probably the sturdy Joseph Campbell mantra: Follow Your Bliss. Not a bad mandate for these times… or any times.

If the medium is the message, this one needs some massaging.

The rock numbers are as galvanic as they should be, played by an excellent (unseen) orchestra of eleven multi-instrument players. (The Stillwater songs were written by Crowe and his then-wife, Nancy Wilson, lead singer with Heart, with contributions from Peter Frampton).  The older, ‘known’ songs that appeared in the film (“River,” “Tiny Dancer,” “Midnight Rider,” and others) are expertly woven into the mix with the likable new tunes.

The staging, by Britain’s Jeremy Herrin, a first-time musical director (nominated for a Tony Award when the “Wolf Hall” plays hit New York), is generally effective. But most of the choreography (Lorin Latarro) is too frenetic, verging on hyperactive. There’s no motivation for the other performers to repeatedly jump and cartwheel around, lifting William aloft, moving him pointlessly from one place to another. Even some entrances and exits make little sense (like, during the titillating scene when the Band Aids introduce William to sex — en masse).

The ballad duets (“Morocco,” “The Nighttime Sky’s Got Nothing on You,” and the wonderful phonecall between Elaine and Russell, “Listen to Me”) provide welcome respite from the general tumult. More quiet moments — or at least quieter — are in order.

There isn’t much subtlety or nuance, minimal room for the audience to think, conjecture or make connections of their own. Everything is spelled out. The book hews close to the film, though Penny’s role is fleshed out a bit, and that’s a good thing.  We come to care about William and Penny and Russell, and we prize their individual journeys.

There’s a great deal of electricity and entertainment here. (Added opening night excitement: the presence of Joni Mitchell and Pennie Trumbull, the inspiration for Penny Lane).

It’s a great start for a brand new show. But as a fully-formed, ready-for-Broadway mega-musical, one might say it’s Almost Famous.