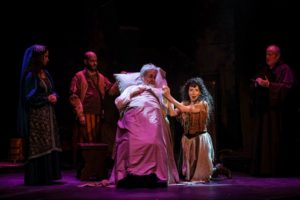 We could all use a few stars in our eyes right now. A few more people who see others through rose-colored (instead of turd-colored) glasses. A bit more chivalry and honor. Compassion. Ethics. Morality. Nobility. High-mindedness.

Those qualities are in short supply these days. But they were in 16th century Spain, as well. It was, after all, the time of the Inquisition (which, I’m embarrassed to say, I learned only recently lasted 700 years – well into the 19th century).

But, back to the 16th — we have Miguel de Cervantes, widely regarded as one of the world’s pre-eminent novelists. His “Don Quixote,” the first part of which was published in 1605, remains, after the Bible, the most-translated book in the world. It’s considered by many to be the first modern novel and the best work of fiction ever written.

A tiny piece of the author’s eventful life and a sliver of his comically massive masterwork inspired the 1959 teleplay, “I, Don Quixote,” which was adapted by Dale Wasserman, with a score by Mitch Leigh and lyrics by Joe Darien, into the 1965 musical, “Man of La Mancha.” The beloved show, which won five Tony Awards, including Best Musical, has been revived four times on Broadway, and translated into multiple, very disparate languages.

Clearly, cultures around the world crave and celebrate a starry-eyed idealist.

The character and his attributes long ago entered the English language lexicon: ‘quixotic’ means idealistic, and often, by extension, unrealistic.

Robert J. Townsend, with his, beautiful, orotund baritone and strong dramatic talent, is perfect in the role. It’s always magical to watch the beleaguered poet Cervantes, thrown into murderers’ prison for “foreclosing on a church” while serving as a tax collector, transform himself, before our eyes, into the craggy, wild-eyed knight-errant, Don Quixote de La Mancha, in an effort to defend his acts to his fellow prisoners in the ‘trial’ they demand of him while he awaits the officers of the Inquisition.

It’s 1594, and he’s still working on the manuscript of his magnum opus. He opens his trunk-ful of theater props and costumes, and the other inmates become all the characters in the amusing and heartrending tale. Then as now, there will be those who admire and those who will stop at nothing to destroy a dreamer and fantasist.

As the much-maligned and abused “kitchen slut,” Aldonza, Heidi Meyer is a marvel. When the originally cast actor, Natalie Rose Havens, was diagnosed with pneumonia less than a week before opening, Meyer, who hadn’t performed in over a decade, stepped in and totally nailed the character — her moves, her saucy, lusty, abrasive attitude, her miraculous alteration under Quixote’s ministrations, all handled with splendid vocal quality and range.  Ironically, Meyer and Townsend have shared a stage before; they co-starred in “Miss Saigon” in 2005, at Starlight Bowl.

As Quixote’s squire, Sancho Panza, Jeffrey Landman is affable but not as funny or portly as others I’ve seen — both characteristics adding comic brio to the role (all the historic images of the duo show a rail-thin knight and a stout sidekick). Landman’s high tenor contrasts nicely with Townsend’s rich bari.

Others worth mention are: Bill Bland, a recent transplant from Seattle, who has performed in opera in several cities, and plays the Innkeeper/Governor with a commanding presence and voice; and Joseph Grienenberger, who contributes lovely vocal work as the Padre.

The elaborate sets, rented from Candlelight Pavilion, are well lit (Michelle Miles). The costumes (Janet Pitcher) offer a just-right mix of the high-born and low.

But under the direction of Scott Thompson, the action doesn’t flow smoothly or organically. The drama often feels like a series of separate set-pieces, marked by ‘buttoning’ poses. Transitions are less than effortless, and singers frequently turn to face the audience rather than their fellow actors, even in intensely personal moments (like that tear-jerking death scene), which separates us from the emotional connection.

Still, the story and sumptuous score will suck you in. It’s a little schmaltzy, but there’s so much to love.  And especially now, a great deal to be said about being “willing to march into hell for a heavenly cause.”