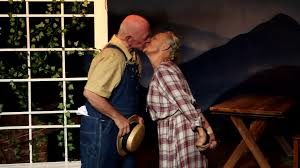 Foxfire. It’s a 50 year-old magazine, an influential book series, an experiential education program, and a play with songs. All pay nostalgic homage to the simpler life of the Appalachians of Georgia’s Blue Ridge Mountains.

Foxfire is actually a bioluminescent fungus that clings to rotten wood. In the 1982 dramedy by theater legend Hume Cronyn and Susan Cooper, “Foxfire” is a metaphor for the people who cling stubbornly to their land and their traditions.

The Nations family has held 100 acres on the mountain for three generations. Now, husband and children have flown the coop. Things change, but not for 79 year-old Annie, who lives up there alone, minding the chickens, and staying close to the family graveyard.

Her son, Dillard, a country singer — and possibly a hillbilly sellout — has made a few bad life choices. He wants Annie to move near him and his children in Florida.

A greedy real estate hustler wants to buy her out and create a housing development.

Her bull-headed, Bible-quoting husband, aptly named Hector, has plenty to say, too – though he’s not always around.

We learn a lot about the hardscrabble life and rugged determination that keeps these beliefs alive – superstitions about planting-time and childbirth. And the importance of family.

You don’t have to live in Appalachia to relate to aging parents and their reluctance to accept change, or alter their lives.

Some of the play is predictable, and much is over-sentimentalized. But it also stirs feelings about old ways vs. new, and father/son worldview collisions.

The co-production of Scripps Ranch Theatre and the Oceanside Theatre Company, helmed by Oceanside’s artistic director, Ted Leib, maintains a leisurely pace and a heavy focus on knee-slappin’ bluegrass music, thanks to a fine 4-piece band.

But what really makes the well-designed production sing is the performances — honest, focused, and by no means overdoing or ridiculing these resilient, self-reliant folks.

Dagmar Krause Fields and Jim Chovick are delightfully matched as the craggy, poignant and often amusing parents. The rest of the cast provides strong support.

Here, the past meets the present, and foretells an inevitable future.