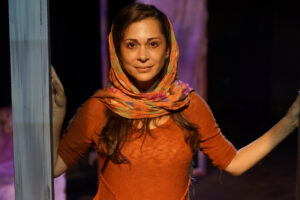 One relates the terrifying attempt to escape a war-torn country where neighbors are being shot or hanged in the streets and in their homes, where a family is forced to leave everything behind — and is robbed of the rest.

The other solo show could be the sequel. What happens after settling in America — where women are subjected to rejection, degradation, humiliation and rape — just for wearing the head-scarf hijab.

“Unveiled,” beautifully, achingly written and performed by Rohina Malik, has been presented around the country. When the pandemic hit, she could no longer perform live, so her sister filmed her (sometimes a bit jerkily) in various outfits and locales around her Chicago apartment.

The San Diego Repertory Theatre streamed the tour de force for one weekend only (November 13-15). Malik followed each streamed presentation with a live talkback. It was an incisive and instructive 50 minutes.

Each of the five unnerving tales Malik tells begins with the welcoming ritual of serving tea — from different countries and cultures: Pakistani, Moroccan, Palestinian, etc. But the smiling, friendly description of the drink soon gives way to a gut-wrenching confessional, underscoring how mercy and kindness can triumph over hate.

“No Way Back,” a world premiere streaming event presented by The Roustabouts Theatre Co., was written by Mahshid Fashandi Hager, based on the true story of her family’s terrifying escape from Iran during the revolution of the early ‘80s, when Mahshid was a young girl.

She initially put her gut-wrenching memories on paper as a short story in poem format, which she submitted to the San Diego Memoir Showcase in 2017. It caught the eye of Roustabouts co-founder Phil Johnson. He and Marni Freedman (collaborators on Johnson’s wildly successful solo shows, “A Jewish Joke” and “Roosevelt: Charge the Bear”), helped Hager re-shape the piece into a 45-minute recollection, which went on to win first place in The Roustabouts’ Solo Show Contest in 2018.

Now, an expanded, 105-minute filmed version stars Jessica John, co-founder of Backyard Renaissance Theatre, who has a deeply personal connection to the work.

John’s Assyrian grandmother, Hannah Hermiz, was also forced to flee her homeland as a child, leaving behind a wealthy, carefree life. Not only did she endure the terrors of genocide, but she had to suffer the loss of her mother, brother and 21 of her relatives, who died in their effort to reach the U.S.

Hager’s family was trying to make their way to Germany. She now lives in San Diego and works as a Marriage and Family Therapist specializing in the after-effects of trauma, a subject she knows all too well.

When we first meet her in “No Way Back,” Mahshid is 6 years old (the play’s timeframe is 1976-1981). She’s already aware, if not specifically informed, of the goings-on:

The Shah had been replaced with the theocracy of Ayatollah Ruhollah Khomeini, and the Islamic Revolution had begun.

Periodically, her family takes refuge in the basement. We see her in the best of times, at age 8, beloved by her large extended family (many of whom Hager portrays), enjoying privilege, and lovely gifts from her world-traveling Dad.

But then, there is no other option for the family; it’s time to leave.

And so begins a torturous, terrifying journey featuring days and days of walking, freezing cold, barriers and rejection, and perilous connections with facilitators.

The play keeps us in edge-of-the-seat suspense; we feel like we’re experiencing Mahshid’s hardships in real time.

But sadly, it’s not a unique one for immigrants. One-half of the world’s approximately 26 million refugees are under age 18.

What these highly affecting plays give us is a heightened sense of connection and compassion. Their dramatic retellings leave us with an acute awareness of the profound courage, sacrifice and hope it takes to leave your country behind, skirting danger and death in an effort to find safety and freedom for yourself and your family.