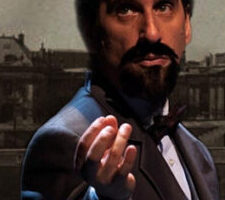 They may have lived a century apart — but they share a strong musical, emotional and geographical connection.

Composer Claude Debussy (1863-1918) had a profound influence on young musician Hershey Felder. And in his most personal presentation to date, Felder is adding the French modernist to his Great Composer Series (joining Beethoven, Gershwin, Tchaikovsky, Chopin, Berlin, and others).

“Hershey Felder: A Paris Love Story” had its world premiere at Theatreworks Silicon Valley in 2019. Felder was scheduled to present the solo piece at the San Diego Repertory Theatre last May. But the pandemic jettisoned that, and many other performances.

Now, Felder is using his newly-launched global production company (HFP– Hershey Felder Presents) to film his work from his home in Florence, and offer it to his fans in the U.S., Canada (where he was born) and Europe. And he has announced a full “Live From Florence” season that extends well into next Spring.

In this piece, Felder wears two hats; he inhabits the Great Composer, and he also plays himself at age 19, a callow young pianist and music-lover who is a bit obsessed with the work of Debussy.

It’s all tied up with his mother, to whom the play is dedicated. She especially loved “Clair de Lune,” and her dream was to go to Paris. But tragically, she died at age 35, when Hershey was just 13 years old. Even cancer and serious surgery (a colostomy; a radical mastectomy) linked Debussy and his Mom.

By the time he made it to Paris, Felder (who attended Juilliard as a teen) had already learned many of Debussy’s piano pieces, which he plays for us in the show, and he had read about the composer’s life and loves, triumphs and tragedies.

He needed to stand where Debussy had stood, seeing and hearing what had inspired the composer who asserted that nature was his religion. Felder particularly wanted to put himself at Point Zéro, the star embedded in the ground at the entry façade to the Cathedral of Notre Dame, at midnight on the very day of Debussy’s death, March 25 (his mother also died in March — 1976).

And of course, he also wanted to visit the apartment where Debussy had lived (he even snagged an invitation inside).

So, as this “Debussy” tells his own story, he’s also telling the story of the young Felder.

It’s a tricky gambit, but in the text that Felder himself wrote (as he always does; his frequent collaborator, Trevor Hay, deftly directs), he makes it work.

Though Debussy had a pretty interesting life, it’s Felder’s personal memories that grab us — that, and the piano virtuosity, which is elegant, evocative, ethereal, and executed with a delicate touch.

The stories are bookended with the familiar and beloved “Clair de Lune” (Moonlight), though we also hear excerpts from “L’après-midi d’un faun,” as well as “La Mer,” “Ballade,”  “L’ile Joyeuse,” and others.

At the end, the clean-shaven Felder (alternating with the goateed Debussy) talks to us directly, recalling his last visit with his mother, and her final, surprisingly relevant last words to him. This is the emotional core of the production.

It deepens the piece, and adds layers to the performance and our understanding of Felder’s own story, as well as Debussy’s.

Last-minute changes to the production came when a filming trip to Paris was canceled due to reinstated lockdowns in Europe. Felder is credited with the Production Design, primarily a suggestion of the Pont des Arts in Paris, which Debussy frequented. The rest of the visuals are effectively presented or superimposed through green-screen technology and archival footage.

It’s not clear who we, the audience, are supposed to be, but Felder addresses us directly, as he typically does, drawing us into and enveloping us in both stories.

His French pronunciations are immaculate (he speaks multiple languages); his French-accented English is more variable.

Still, we’re with him all the away, intrigued by the compelling dramas, and transported by the marvelous musicianship.

Although a wide variety of theaters are participating in this production, San Diego Rep audiences get special benefits, including one-week access and a special VIP ticket option with bonus extras (a French pastry demo! Debussy loved desserts).

Felder, a masterful performer, has a loyal following in San Diego, and this is a delicious little payback. Enjoy the show — and get your just deserts!