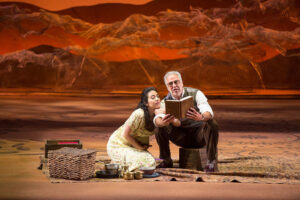 Perusing my “Best of the Year” lists over the 2010s, I noticed first how the local theater landscape had changed.

Some of the most powerful and memorable productions came from theater companies that are no longer with us — most notably, tiny, spiky/spunky, risk-taking ion theater and the aptly-named Intrepid Theatre (still alive, but focused now on outreach and education, rather than producing new work).

Over the course of the decade, we also lost the imagination and ingenuity of Mo’olelo, and the musicals of Starlight and Lyric Opera. Both InnerMission and New Fortune Theatre seem to be on hiatus, the latter, at least in part, for want of a home-base — affordable performing spaces are definitely at a premium in San Diego. I just came across a rubber bracelet from a New Fortune event that says, ‘Theater is for the daring.’ Amen to that.

Accepting that challenge, a number of small new theater companies have cropped up over the years, but their staying power over time remains to be seen.

Community theaters have become professional or semi-professional (Scripps Ranch Theatre; OnStage Playhouse), and our largest theaters have expanded in inventive ways: the La Jolla Playhouse with its exciting, site-specific, biennial WOW (Without Walls) Festival, and its DNA program to shepherd new work; and The Old Globe’s extensive community engagement program, Globe for All, that has become a national model.

The San Diego International Fringe Festival launched in 2013, and has waxed (and last year, waned) in the years since. New play festivals have become de rigueur at just about every theater, a testament to the voracious appetite of San Diego theatergoers for the different and the new.

Though it’s never professed as the ultimate goal, we sent an impressive number of shows to Broadway over the decade, many of which never made it onto my Best of the Year lists — and those actually didn’t last long on the Great White Way.

But the shows that endured really were winners, musicals that we could be proud of helping to birth: “A Gentleman’s Guide to Love and Murder” (The Old Globe) and “Come From Away” (La Jolla Playhouse), which tore at the heartstrings of even hardened New Yorkers, with its hopeful message of human-kindness during the worst of times (the immediate aftermath of the 9/11 attacks). The show earned Playhouse artistic director Christopher Ashley a Tony Award for Direction.

In case you missed it, you’ll be happy to know that Broadway San Diego is bringing us the national touring production of “Come From Away” in the late spring (June 23-28).

“Diana,” the new musical about the much-loved Princess, started at the Playhouse and is headed to New York. “Almost Famous,” the San Diego-set musical based on Cameron Crowe’s life and his beloved 2000 movie, premiered at The Globe, and is sure to land on Broadway .

But most noteworthy, especially in view of national conversations, is the increasing diversity in San Diego theater, in terms of writers, actors and content. There has been an ever-expanding number of female playwrights and directors, as well as people of color, though they’re still vastly outnumbered. And all theaters have embraced color-conscious and non-traditional casting. This may not always precisely match the timeframe or setting of the plays, but it reflects the diversity of audiences that theaters hope to attract (theatergoers still remain, alas, decidedly white, middle-aged and well-to-do, though there are certainly exceptions).

It seems that, the more similar the people onstage are to those viewing them, the more the younger or diverse audience is attracted to the show. Witness the impact of “Hamilton” on Broadway; the average age of Broadway theatergoers is now 40, way below what it has been for decades.

All this diversity has given us a much broader view of America, through a range of perspectives. That struck me most when reviewing my Picks of the Year over the 2010s.

We saw America through the eyes of:

and The Other: “The Whale” (Cygnet); “Hedwig and the Angry Inch” (Diversionary).

There were plays that focused on immigrants: “Hamilton” (Broadway San Diego) and “Ironbound” (Moxie Theatre). And plays that spotlighted class distinctions: “The Quality of Life” (Intrepid); “Parade” (Cygnet); “Of Mice and Men” (North Coast Rep).

Plays that looked ahead to the future: “When the Rain Stops Falling” (Cygnet); or offered a different angle on the past: “The Virgin Trial,” “Angels in America” and “Parade” (Cygnet); or took a quirky look at human behavior: “Shockheaded Peter” (Cygnet), “Venus in Fur” (San Diego Rep, OnStage Playhouse), “The Hour of Great Mercy” (Diversionary), “Dead Man’s Cellphone” (Moxie).

Classics were revisited in imaginative ways: (“Who’s Afraid of Virginia Woolf” (Intrepid), “An Iliad” (La Jolla Playhouse, New Village Arts), “Eurydice” (Moxie), “As You Like It” (The Globe), and “Way Down River” (North Coast Rep).

Plays set in other countries gave us a wider view of the world, our commonalities and differences:

This is by no means an exhaustive list; it only encompasses the productions that I considered to be the best of their year. But it does give an inkling of what theaters large and small have been interested in exploring, though we could certainly ramp up the variety and diversity across the board.

With all the political strife the country has been experiencing, I’ve often felt that there weren’t enough politically-oriented plays. Some told stories that resonated with our current crises and dilemmas, but the audience was left to make the connections themselves; the plays weren’t overtly about the American problems and impasses of today. Perhaps, in recent years, audiences were more anxious to escape the daily news than re-visit and re-hash it in the theater.

But the arts, and especially theater, remain a vibrant and potent way to examine ourselves as citizens and as humans. Some productions may even be seen as a call to action. Drama — and comedy — can often make it easier to view ourselves and our predicaments through the eyes and lives of others.

Hopes for the New Year — and beyond — in San Diego Theater:

I hope all San Diego theaters will make use of the Master Calendar of Opening Nights that has been devised by the San Diego Performing Arts League (https://sdpal.org/opening-nights/). This will help avoid having too many shows open on one night, and none on an adjacent night, which presents a challenge for critics and audiences alike.

I hope more performance spaces will be made available to growing young theaters, and those with a proven track record.

I hope that theaters will take more risks, be more experimental, and give us more tasty, chewy, politically-relevant morsels to bite into (though some light comic fare and fizzy musicals will always provide a pleasant diversion).

I hope we continue to be the first to see new work produced.

I hope more people attend play readings, which can be so satisfying, because they strip a play down to its bare bones — just the characters, their story and their relationships — without the distraction of sets, costumes, movement or lighting. This can be a thrilling experience.

Most of all, I hope more San Diegans realize what a dynamic, vital theater city we live in, and take advantage of the myriad performance opportunities, and discount ticket availability (sdartstix.com, Goldstar.com) when needed.

We are lucky to live in one of the major theater cities in the country. We’re one of the primary exporters of shows to Broadway. We have theaters of all sizes and proclivities. And there really is nothing like sitting in a darkened space with other people, watching a riveting story unfold before your eyes, not pre-recorded or on a screen, but live, happening in front of your face, an experience shared with others. Every actor will tell you that no two performances are the same, because of the audience. You’re the vital ingredient — when you laugh, or sniffle or gasp — that can shift a performance in the moment.

I feel privileged to have spent 30+ years seeing thousands of productions in my adopted hometown. And I always greet a new year with excitement and anticipation about what’s ahead on local stages. Please join me there, whenever you can, in 2020.