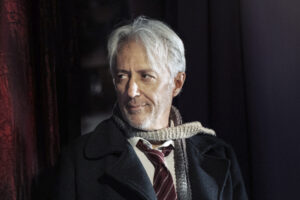 Can one war stand in for all wars?

In the brilliantly conceived “An Iliad,” a riff on Homer’s epic poem (“The Iliad”), the Trojan War, with its larger-than-life warrior-heroes and lamenting wives and mothers, can indeed be seen as emblematic of every war since the Trojan War of 1200 B.C.E.

In the 2012 stage adaptation by director Lisa Peterson and actor Dennis O’Hare (working from the acclaimed translation by Robert Fagles), the Poet is an Everyman from the oral tradition — a bard, a griot, a minstrel — who appears with his Muse (a musician). The Poet was there, he tells us, a witness to this war and all the others that followed.

His retelling, with occasional passages in Greek, recounts several weeks of the mythical/historical decade-long Trojan War, in extreme closeup.

We meet the Bronze Age protagonists and antagonists, Trojan and Greek, from the “good guy” family man, Hector, to the petulant/militant Achilles. Also, the meddling gods. And the women left behind.

The Poet presents himself as a reluctant narrator, weary from traveling from place to place for millennia, heartsick but compelled to tell the tale. He’s frankly exhausted by it all when we meet him, bent over, lugging his scruffy suitcase.

This is the third incarnation of the piece I’ve seen (I’ve also been awed to stand at the rubble-strewn site of Troy, but that’s another story for another day).

My first experience of the piece, in 2012, was a co-production of the La Jolla Playhouse and Berkeley Repertory Theatre, directed by co-creator Peterson, starring veteran Shakespearean actor Henry Woronicz.

And now we have North Coast Repertory Theatre’s production, with gifted, charismatic performer Richard Baird at its center.

Each has a decidedly different take on the play and the role.

Woronicz and his Muse, double bassist Brian Ellingsen (who was with the show from its inception) presented a duet — lyrical, musical and definitively dark and melancholic.

Libby, accompanied by double bassist Gunnar Biggs, spotlighted the women, adding a layer of sorrow and heart to her gut-wrenching recounting of the violence and gore.

Baird and Ellenstein (with cello accompaniment by Amanda Schaar, Baird’s multi-talented partner in work and life) put their focus on the rage, which is potent and palpable.

Baird’s muscular performance accents the bilious and bellicose. He’s at his best when re-enacting the brutal, bloody final confrontation between Hector and Achilles.

But he gives short shrift to the more tender moments: Hector with his family (blithely tossing his tiny, infant son in the air — his wife should’ve killed him for that!); Achilles’ deep love for Patroclus (frequently misspoken as ‘Patrocalus’); and all of the females involved. There is little of their keening, wailing and grief here.

The solemn, poetic account should feel like an elegy. But this reading of the piece is too choleric for any measure of sentiment or sorrow.

The shabbily dressed Poet is dissipated, to be sure, but his dissolution seems to be due primarily to alcohol (which he frequently imbibes), more than any anguish and exhaustion resulting from the inevitability of enmity and combat.

The high point of this play is always the long, long litany of endless battle, a catalogue of every war in history, small and large, local and global, from Troy to Syria.

It should be chilling, horrific, breath-stopping. But in this intellectualized version, it sounds more like a list, externalized and lacking ache or sorrow.

Similarly, Schaar’s score, which she composed, serves more as punctuation than conversation: strident and discordant, with little mournful lyricism or melancholy. The tone of the production, therefore, is consistent, but less varied, subtle and penetrating than it could be.

The stripped-down surroundings and minimal accoutrements (set design by Marty Burnett; props by Phillip Korth), filmed on an empty North Coast Rep stage (cinematography and editing by Aaron Rumley), are just right for the bare-bones structure of the play. The (uncredited) costume is aptly seedy and worn.

Opening and closing the piece outdoors, at the ocean’s edge, gives an added sense of the timelessness of the story’s conflict and carnage. If only we could turn the tide.