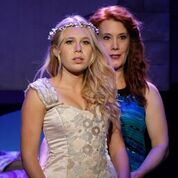 This past summer, Moonlight Stage Productions did a marvelous job with the ABBA jukebox musical, “Mamma Mia!”. Now, the Welk Resort Theatre is in the midst of a whopping 6-month run in Escondido. Lots of steady jobs for lots of local actors!

The production features a highly talented cast of 19. The singing is terrific and the dramatic interactions are consistently credible. There are still too many songs in this musical, which was written by British playwright Catherine Johnson and composed by former ABBA members Benny Andersson and Björn Ulvaeus. It did, however, run for 14 years on Broadway, and spawned two movies. So ABBA lives on… and on.

There’s no question that the music is infectious. Still, some of the lesser-known songs are awkwardly shoehorned into the unlikely two-tiered romance that juxtaposes a strong-willed woman of the ‘70s with her equally headstrong daughter in the ‘90s.

At the Welk, the set is considerably less than elaborate, the costumes are sometimes unflattering, the band occasionally sounds over-synthesized, and there were miking problems on the night I was there.

But the levels of energy, humor and heart are high.

Misty Cotton is a powerhouse as Donna, the proprietress of the island taverna in Greece. Her interactions with her daughter, Sophia, whom she’s raised singlehandedly, are touching and believable. As that young bride-to-be, 18 year-old Olivia Hodson is a tiny dynamo who needs to have a lot more featured roles.

Barbara Schoenhofer, who is playing Donna’s long-legged, jaded former bandmate for the third time (including at Moonlight) is a lithe, limber charmer. Nancy Snow Carr, as the other disco band-member, has some laugh-out-loud moments, especially in the pantomime scene with Schoenhofer.

The groom, the island guys, the dancers, Sophia’s girlfriends and her three potential fathers, are all lively and talented.

With the forceful voices of this ensemble, “Mamma Mia!,” despite its inherent flaws, is irresistible. For audiences of all ages, it’s a guaranteed good time.