“COME FROM AWAY” at Segerstrom Hall Costa Mesa 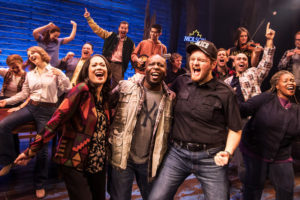 Whoever said there are no second chances?

A huge dramatic opportunity is waiting for you, in case you missed it the first time around.

The musical “Come From Away” had its world premiere in 2015, with record-breaking runs at the co-producing theaters: right here at the La Jolla Playhouse and at Seattle Repertory Theatre. The heartwarming show opened on Broadway in 2017, and after 800 performances, is still going strong.

It’s rare for me to view a show more than once, but I was so moved, I saw this one three times while it was in San Diego.

I wasn’t the only one who thought it was terrific. Ben Brantley, chief theater critic for The New York Times, said “even the most stalwart cynics may have trouble staying dry-eyed during this portrait of heroic hospitality under extraordinary pressure.”

The musical is grounded in fact. After the 9/11 terrorist attacks, the U.S. airspace was closed, and 38 international planes were diverted to the tiny town of Gander, Newfoundland. The 7000 unexpected arrivals effectively doubled the size of the town.

The way the locals banded together, in solidarity and extraordinary altruism, to welcome these distraught, disoriented passengers, to calm them, feed them and provide for them, including clothes, diapers, pet-care and showers in their own homes, was beyond charitable; it was downright miraculous, a triumph of humanity over hate.

On opening night in La Jolla, several of the actual ‘come-from-aways’ and Gander residents were in attendance. This only made the story more real, and like the show itself, renewed your faith in humankindness.

So, if you missed this unforgettable experience, here’s your chance to make up for lost time. The touring production of “Come From Away” ends its successful run in Los Angeles on January 6, and moves to Segerstrom Hall in Costa Mesa, for 2½ weeks in February. You’d be crazy to miss out.

In this era of anger, divisiveness, incendiary language and gun-toting animosity, “Come From Away,” with its Celtic-inflected score and brilliant, Tony Award-winning direction, by our own Christopher Ashley, will fill you with hope for the return of civility and humanity.