“A JEWEL IN THE CROWN CITY” at Lambs Players Theatre 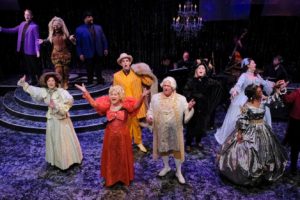 Anniversaries and milestones should be celebrated.

So, it makes perfect sense that Lamb’s Players Theatre would want to crow about its 25 years in Coronado.

Producing artistic director Robert Smyth began the narrative section of the evening by recounting how the move from the small arena stage in National City came about – including crawling into a small, dark opening, using flashlights for the first viewing of the 100 year-old, long-shuttered Spreckels Building on Orange Avenue.

After significant renovation, the facility and its residents truly have become “A Jewel in the Crown City” (Coronado’s moniker, “the crown city,” dates back to 1602, when Sebastian Vizcaino dubbed the island Coronado, Spanish for “crowned one”).

This 25-year retrospective comprises excerpts from 25 musicals representing the theater’s 25 years, with mention made (and photos projected) of dramas, ‘epic stories’ and world premieres (48 in 48 years).

The evening is presented in classic revue style. The 16 mega-talented performers (most of whom sing, and five also serve as musicians at various times: Luke Monday and Angela Chatelain Avila on violin; Michael Louis Cusimano on guitar; Caitie Grady on piano and Lambs’ associate artistic director Deborah Gilmour Smyth on accordion).

Each of the black-clad singers gets a wonderful moment in the spotlight as part of the solos, small group and full-cast numbers.

The vocal quality is superb throughout. The song choices (many of which emphasize religious themes, referencing Lambs’ Christian theater origin) highlight the skills of the performers, in impressive dramatic or emotional presentations.

Gilmour Smyth kicks off the evening with her gorgeous soprano in “Clusters of Crocus” from “The Secret Garden.” Cusimano and Grady reprise their stellar performances in “Once” with the melancholy “Falling Slowly.” On the more high-spirited side, Bryan Barbarin leads a rousing full-chorus “Sit Down You’re Rocking the Boat” from “Guys and Dolls; Robert Smyth again becomes John Adams in “But, Mr. Adams” from “1776”); and Grady, Avila and Joy Yandell make for a lively trio of sisters in “Matchmaker” from “Fiddler on the Roof.”

For some reason, there’s a through-line of comical tongue-twisters, repeated three times during the course of the evening: by Grady, then Mackey, and later, by Cynthia Gerber, who serves as (generally superfluous) co-emcee with Jim Chovick. Mackey also does a bangup job on “Trouble” from “The Music Man,” Kerry Meads is adorably funny in “Philosophy” from “You’re a Good Man, Charlie Brown,” and Eileen Bowman kills with “Adelaide’s Lament” from “Guys and Dolls.”

As a tribute to the magnificent costumes created over decades by resident designer Jeanne Reith, a wide-ranging, opulent fashion parade of mixed styles and eras closes the first act.

“Godspell” and “Joseph and the Amazing Technicolor Dreamcoat” are represented, and the grand finale is Handel’s “Hallelujah Chorus,” which was the focus of “Joyful Noise,” a show Lamb’s took to New York for an extended Off Broadway run.

The harmonies and a capella segments are glorious. The four-piece band (co-directed by G. Scott Lacy and Cris O’Bryon, who also provides vocals) is outstanding and versatile. These loyal musicians — Rik Ogden, Dave Rumley and Oliver Shirley — have been with the company for decades.

The only weak element of this entertaining evening of memory and song is the narration, which is either precious and forced, saps the energy from the room after an exuberant performance, or presents too much of a sales pitch, not only soliciting new subscribers, but also actually asking for money (in the guise of the “Tips” song from “Pump Boys and Dinettes”), with the ‘waitresses’ going through the audience cheerfully accepting contributions to support the theater’s education outreach program. Certainly a worthy cause (a show about bullying that goes into county schools), but this really isn’t the time or place.

Some of the history of the company could be projected on the fabric proscenium (scenic design by Mike Buckley, another Lamb’s long-timer, as are lighting designer Nathan Peirson, projection designer Michael McKeon, sound designer Patrick Duffy and stage manager Maria Mangiavellano). Some of the narration could be eliminated; it frequently distracts from the impressive display of talent, and the wide range of productions that have been mounted over the years. The audience’s appreciation is well earned; it doesn’t have to be asked for.

For those (like me) who’ve seen just about every show recalled in “Jewel,” this is an energizing, heart-warming reminiscence.

If you’re new to Lamb’s Players Theatre, or you haven’t seen many of its productions, you’ll be bowled over by the expertise and vocal precision of the show itself and the musicals it represents.