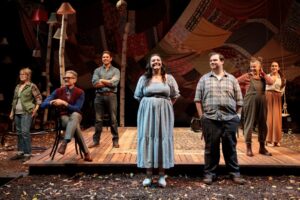 Inertia is endemic in Chekhovland.

The Russian playwright’s sad-sack characters endlessly pine, regret, yearn and suffer. But they never do much about their interminable complaints. (“We’ll never get to Moscow,” lament “The Three Sisters”). They’ve perfected the art of the kvetch.

And yet, Anton Chekhov (1860-1904) considered his Big Four plays (“The Cherry Orchard,” The Three Sisters,” “The Seagull,” “Uncle Vanya”) to be comedies. The disputes over that classification, and the agreement about their brilliance in conveying quotidian life, have spawned innumerable offshoots and variations.

Aaron Posner is a modern playwright who has re-fashioned three of the plays (so far), making them considerably more topical and comical.

He created “No Sisters” instead of Three. His “Stupid F**ing Bird,” a contemporary riff on “The Seagull,” was a deep, bitingly sexy delight when it was directed by associate artistic director Rob Lutfy at Cygnet Theatre in 2016.

Now the two theatermakers have teamed up again for another felicitous collaboration, for the regional premiere (with pandemic updates) of Posner’s “Life Sucks,” his 2015 adaptation of “Uncle Vanya.”

There’s still a lot of kvetching. And BTW, a lot of Yiddish words get thrown around. Also a lot of swearing. So, if you’re sensitive about either of those, maybe this isn’t the show for you. But it should be.

Oh, and also audience participation/interaction. No pressure, just existential questions or requests for advice tossed to the onlookers when the characters become baffled or confused. By the end, this serves to offer a much more hopeful and thought-provoking ending than Chekhov ever provided.

Posner is expert at deconstructing the master’s plots and characters, while making the proceedings consistently funnier.

There’s a good deal of meta-analysis, as well as on-the-nose explanations of characters’ internal emotions and eternal angst.

Just about everyone is in love with her, including the hottie Dr. Astor (Jorge Rodriguez), who has a few ardent fans himself, but is so depressed about the deteriorating environment and his own inadequacies that he’s drinking himself to death.

Death is never far from the mind of the pompous, pedantic Professor (Frank DiPalermo), who’s aging and ailing (or maybe hypochondriacal), and doesn’t feel up to the task of maintaining the interest of his gorgeous young wife.

His daughter by his first marriage, schlumpy Sonya (Savanna Padilla), pines for the Doctor; the Doctor and the hapless, lumpy Kvetch-in-Chief, Vanya (MJ Sieber) pine for Ella; the Professor pines for his life and his wife.

And there are two new/tweaked characters: the wacky, pigtailed Pickles (Beatrice Basso), a female stand-in for Chekhov’s tragicomic Waffles, and the wise and surprising Babs (Patty Gallagher), a more interesting composite of Chekhov’s aging Maria and comforting Marina.

With this robust, skillfully improvisational cast and Lutfy’s superb direction, the performances are all terrific. You can’t help but love-and-hate all of them — so broken, so self-absorbed, so unaware of what they do have (including each other). They’re too busy moaning about what they don’t have or haven’t accomplished or wish they could do (though, in true Chekhovian style, none of them makes any particular move to change things).

Speaking of moves, some of them (created by ace choreographer Michael Mizerany) get a little repetitive — especially that heart-fluttering hand action that is so endearing at first, and does emboy the feeling of the piece.

But the Russian-inspired music (Steven Leffue) and dance steps effectively hark back to the source material.

You’ve probably gotten the picture that there is no fourth wall in this production. The cast often interacts with the audience. In fact, the running-time of the show varies depending on how active and responsive the audience is (the performance I attended was 2½ hours including intermission. Sometimes, it can extend 15+ minutes longer).

Some audience call-outs were clever or humorous. Others were earnest, poignant or touching

Both Chekhov and Posner are galvanized by the ridiculousness of life, while also painfully aware that its volatility can be crippling. Both are convinced that we survive and thrive best when we can laugh at ourselves.

The play confronts how we can, do, or should live our lives in difficult times. As Lutfy points out in his Program Notes

, Chekhov was writing (and practicing medicine) during the cholera epidemic of 1892, which included mass quarantines and face masks, not to mention resistance to sanctions that led to riots. Needless to say, there was considerable uncertainly about the path ahead … as well as the paths not taken.

So, we can relate to the characters and their situation. And thanks to Posner and Lutfy, we can laugh at their inanity and ineptitude… and identify with that, too.