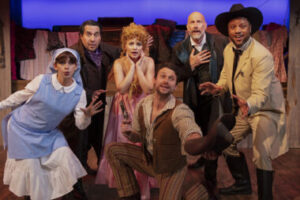 Every theater company, like every individual, has to decide what’s in their best interest in these perilous pandemic times.

On Broadway and Off, some theaters returned to a regular performance schedule, some reduced the number of weekly performances, some postponed, some canceled altogether, and others are participating in what’s being called ‘hibernation,’ going dark for awhile to see what happens, and perhaps opening in a different space from where they began.

San Diego also had Big Plans for 2022, and a heavy roster of openings in January. Many of them won’t happen this month; some, not all. A few will march on. Most modifications were made, as Cygnet Theatre put it, “out of an abundance of caution,” in view of the alarming Omicron surge. Some postponements were due to the vagaries of nature or theater construction needs.

Herewith is an evolving alphabetical list, all open to change as the situation demands. Whatever you choose to see or do, be sure to check with the theater for any schedule updates, and be certain that you meet their (ever-stricter) COVID requirements for audience members.

Broadway San Diego has canceled its one-night engagement of “Friends: The Musical Parody” that was set for January 20 at the Balboa Theatre, due to a scheduling conflict. BSD officials are hoping to reschedule the show later in the season. Now, its 2022 schedule will open February 24 with a one-night performance of “The Choir of Man” at the Balboa Theatre, followed by the national touring production of “The Band’s Visit,” March 1-6, at the Civic Theatre. broadwaysd.com.

Cygnet Theatre’s “Life Sucks,” which was scheduled for January 26-February 27, will now open February 3 and run through February 27. cygnettheatre.com

Lamb’s Players Theatre’s “The Hound of the Baskervilles,” originally scheduled for January 22 – March 20, has been postponed to October. Lamb’s will delay the opening of its 2022 season until April 2, when it will reprise its acclaimed 2019 production of the musical, “Million Dollar Quartet.” lambsplayers.org.

Moonlight Stage Productions had planned to kick off the new year (January-March) with Club M, an intimate, enclosed cabaret space on its stage. The first performance on the docket, a cabaret concert by Leonard Patton, was pushed back from January 15 to March 15, because the venue’s overhead lighting rig was being rebuilt. The next one-night cabaret show, “Ladies Who Lunch: A Tribute to Stephen Sondheim,” will continue as planned on January 29. moonlightstage.com.

New Village Arts’ Final Draft New Play Festival, originally set for January 7-9, has been rescheduled for April 1 to 3. Its world premiere about Japanese internment in the U.S., “Desert Rock Garden,” originally scheduled for a January 21–February 20 run, will now open on February 19, which happens to be the 80th anniversary of the Day of Remembrance that marks the date the federal executive order was signed to create Japanese internment camps. newvillagearts.org.

The Old Globe‘s annual Powers New Voices Festival of new plays, originally planned for January 14-16, will now be held April 6 to 10. The first full production of the year, “Trouble in Mind,” will play February 5-March 13. theoldglobe.org.

Playwrights Project has postponed its Plays by Young Writers Festival, which was scheduled for January 29-February 2. New dates have not yet been announced. playwrightsproject.org.

The San Diego Repertory Theatre has postponed its production of “The Curious Incident of the Dog in the Night-Time,” which had been scheduled to begin previews on Jan. 6; the delay was due to flood damage to the theater from a recent rainstorm. The theater hopes to reschedule “The Curious Incident” in a summer timeslot. In the meantime, the REP will be streaming the filmed adaptation of the stage play, “A Weekend with Pablo Picasso,” written and performed by Herbert Sigüenza, from January 17- February 6. Available online. The REP’s regular 2022 season will now open with “The Great Khan,” running March 3-March 27.  sdrep.org.

Scripps Ranch Theatre‘s “Heisenberg” was scheduled to run January 14-30. But a flood caused the theater to cancel this weekend’s performances. SRT is hoping to open next weekend, but it’s not clear if the repairs will be completed in time. No official reopening date has been announced yet. scrippsranchtheatre.org

Going On as Planned…

Patio Playhouse‘s “Hedwig and the Angry Inch” opened, as planned, on Friday January 14 and will continue through February 6. patioplayhouse.com

As North Coast Rep artistic director David Ellenstein explained his decision, “The majority of our audience wants to come back. We are taking all safety precautions—and then it is a choice. We would rather be there for those that want their spirits lifted. We are, of course, crediting anyone who is not comfortable to attend—but I’d say that is less than 1 in 3. After the preview performance, I received so many effusive comments, thanking me for our staying open and allowing them the opportunity to attend this fun-filled show. Theater is needed now more than ever as an uplift to celebrate what is good in the world. At least for those that want to attend.”