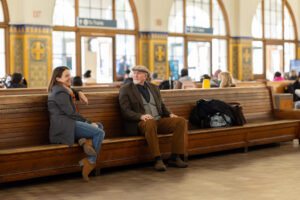 Strange bedfellows and disparate types. Mismatches can be highly entertaining. And life can be incredibly unpredictable.

Case in point: “Heisenberg,” the 2015 creation of English playwright Simon Stephens (whose terrific, Tony Award-winning play, “The Curious Incident of the Dog in the Nighttime,” recently postponed at the San Diego Repertory Theatre, was re-scheduled for this summer).

The titular German physicist, Werner Heisenberg, who posited the Uncertainty Principle in 1927, is never mentioned.

But the whole premise of the 75-minute, 6-scene one-act is based on his notion of mathematical inequality and ambiguity, which suggests that it’s not possible to predict the value of a quantity (such as position and momentum) with absolute precision.

Which translates here into a very divergent duo.

She’s a voluble, volatile, aggressive, not always reliably honest New Jersey-born primary school receptionist. He’s a solitary, passive, taciturn Irish butcher. They meet in a London tube station, when she impulsively kisses him on the neck.

But what draws people together, and what prompts them to let down their guard and trust each other is, in theater and in life, wholly capricious and often incomprehensible.

As Georgie (Denae Steele) casually but helpfully restates Heisenberg’s famous Principle, “If you watch something closely enough, you have no possible way of telling where it’s going or how fast it’s getting there.”

As immutable as their personalities and life-ruts may seem at first, our careful observation reveals that everything is changeable … and unforeseeable.

Charlie Riendeau is making a very welcome return to the boards after more than 100 productions, from London to The Old Globe and most other San Diego theaters.

His laconic Alex is a perfect counterpoint to Steele’s rapid-fire, hyperverbal Georgie. With her, he rediscovers his sexuality. She’s happy to get some stability and assurances, which have been hard to come by in her life.

Once the barriers start to come down, they talk about music (his great love, especially “the spaces between the notes”), and about loss, grief and (inevitably) death.

On the surface, it could be viewed as a fable or fantasy. But there’s something more going on here that might make you look deeper and may grab you in the aftermath.