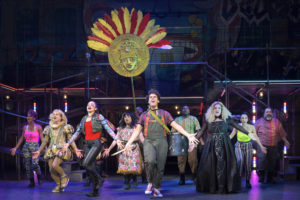 The title gives a taste of what’s to come: a cheeky, salty, irreverent, playfully wicked (even a little scandalous) Aztec story, told smuttily, snarkily and satirically, as only John Leguizamo can.

The Colombian-born, mega-talented multi-hyphenate (actor-playwright-standup comedian-filmmaker) has made a career of telling Latin stories (witness, for example, “Latin History for Morons,” the solo show he workshopped at the La Jolla Playhouse and took to Broadway in 2017 (that trip spawned a film, “John Leguizamo’s Road to Broadway”).

But he’s not in this show. It’s a musical, he says in the program notes, admitting that “I’ve got an amazing voice, except for pitch or melody.”

Based on an earlier screenplay Leguizamo created with Stephen Chbosky, he wrote the book for “Kiss My Aztec!” (along with director Tony Taccone) and the lyrics (with his long-time friend David Kamp, who honed his satirical chops writing for the late, great Spy Magazine; teaming with Benjamin Velez, who also composed the music.

Leguizamo was inspired by shows like “Spamalot,” which gave him license to indulge his snark, silliness – and fart humor.

So what didn’t make it into the musical? (one can barely imagine the cutting-room floor).

There’s a gay Inquisition priest, an inbred Spanish royal, a foppish French “fixer,” the oversexed daughter of the thumb-sucking, cuddle-starved Viceroy, and of course, a human sacrifice and still-beating heart-munching (at least it wasn’t a virgin!).

There’s mention of Trump’s wall (along with an imitation of his speaking style and some of his egregious acts and utterances) and references to racial profiling, conversion therapy, karma, “interracial nookie” (in the song, “Dark Meat”), uncircumsized Jews, quinceañeras, La Jolla Village Drive, “The Lion King,” Bill Cosby and coca overdose (resulting in a “coke-stroke”).

The score is equally um… diffuse – a veritable mixtape of styles, from rap to gospel, and any number of Latin rhythms: tango, salsa, merengue, and more.

This elaborate La Jolla Playhouse production is presented in association with Berkeley Repertory Theatre, which commissioned the piece and mounted its world premiere this past summer. (Director Taccone is celebrating his final season with the award-winning company, after 30-years as artistic director).

It’s 1540, and the Aztecs are enslaved by the conquering Spanish. Their leader, El Jaguar Negro (there’s a lot of Spanish in the piece – about 95% is made clear or translated), is planning to attack the Citadel, where the cruel Viceroy holds sway. The Aztecs’ intention is to fulfill the prophesy of an ancient codex involving a sacred crystal, a full blood-red moon, liberation and the emergence of “a great brown hope.”

Not all of it works. It’s mostly too silly and over-the-top – and often bellowed broadly at the audience.

The linguistic mashup of 16th century Elizabethan English and modern ghetto street-talk is odd (“Wilt thou spooneth with me?”), and often awkward, though it tries to cross all cultural and temporal borders.

Some of the writing and rhymes are clever; some fall flat.

The talented, pliable 11-member ensemble morphs into so many different characters, you’d think the cast was twice its actual size. Taccone has them entering from all sides, so you don’t know where they’ll pop up next (abetted by jackrabbit-quick costume changes).

The choreography (Maija García) is hip and well executed, and the exuberant 6-piece band makes you want to get up and dance.

It’s exciting how many Latinx creatives are involved (including Taccone, whose DNA testing revealed a significant amount of Puerto Rican blood).

The most potent musical numbers bookend the piece and provide the most resonance with today.

The catchy opening song expresses the dread of “White People on Boats,” and the finale proffers the inevitable acknowledgment “Welcome to the future/The world is getting browner.”

But an enthusiastic shout-out is also due to the macha feminist number, “Don’t Tell Me What I Can’t Do,” a defiant manifesto from Colombina (the marvelously lithe, sexy Yani Marin), who insists that she’s “a woman who likes doin’ what a man do,” including “shave her head instead of her legs” and “chopping heads instead of making beds.”

As her long-undeclared love-interest, Pepe the puppeteer/clown, Joél Pérez is hilarious (a role Leguizamo would undoubtedly play if he could sing this impeccably).

The story is deep and significant, the show is less so, and doesn’t warrant a near 2½-hour running time. Substantial trimming and focusing are in order before the show moves on (the team has their sights on Broadway).

You have to be impressed by the palpable energy and ebullience on display. It should drive you, as Leguizamo would hope, to read and question more about the remarkable Aztec culture, once five-million strong, that built pyramids, introduced irrigation, created a calendar —and gave us chocolate!