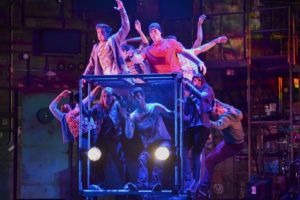 “American Idiot” could have been written yesterday.

But the punk rock band Green Day created the concept album in 2004, and collaborated on the musical theater version that opened on Broadway in 2010.

The national tour came through San Diego in 2013, but no local company has produced the through-sung musical to date.

Until the ambitious, risk-taking OB Playhouse stepped up to the plate.

This punk rock opera, with lyrics by Green Day frontman Billie Joe Armstrong, who also co-wrote the book, with Michael Mayer, is a mammoth undertaking.

Director Juztine Tuazon and choreographer Michael Mizerany have ramped it up even further.

The 16-member cast and 8-member band are larger than the national tour’s. All the players are outstanding; the pulsing energy is electric and electrifying.

Mizerany’s choreography is galvanic. Tuazon uses every inch of the funky space, with performers climbing metal columns, dancing through the house, staging a hot, heavy-breathing sex scene between the two seat sections, and briefly spreading a gigantic sheet over the heads of the audience.

We are totally immersed, which doesn’t make the flimsy plot, minimally-defined characters or shrieked lyrics any easier to decipher.

Still, the story of three disenchanted young men in a small suburban town, craving escape, adventure and self-identity, is timeless.

Clearly, this show isn’t for everyone, but it’s an irresistible magnet for the young and the open-minded. Be prepared for explicit language, brief nudity, violence and drug usage. And very loud music, which earned a Grammy for Best Musical Theatre Album. Many of the songs are raucous, but there are also poignant ballads. The lyrics are political and thought-provoking, delivered with superb harmony.

Wade Kilbarger is hugely charismatic as the centerpiece, Johnny. The gender-bending changes work effectively, the staging is terrific, accented by colorful, ragtag, frequently-changing costumes. While the show is disturbing in its nihilistic content, the production is exciting and exhilarating.