“THE VIRGIN TRIAL” at Cygnet Theatre 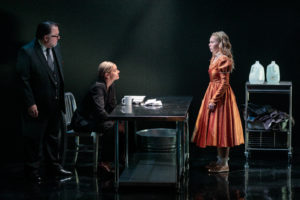 Any time your dysfunctional family gets you down — just turn your gaze back to the hair-raising House of Tudor, and you’ll instantly feel relief and gratitude.

For over a century (1485-1603), Tudors ruled the Kingdom of England, producing five monarchs, the last of which was Elizabeth I. They themselves were ruled by ambition, rage, jealousy and lust. Succession, being the major obsession, led to nefarious scheming and murderous plotting, reckless affairs, regicide, fratricide, beheadings and unbridled ambition.

Canadian actor/playwright Kate Hennig is enthralled by the feminist potential of stories set in patriarchal times. The first play in what has become her Queenmaker Trilogy was “The Last Wife,” which had its world premiere at the 2015 Stratford Festival in Ontario, Canada, which bills itself as North America’s largest classical repertory theatre company. The power couple at its center was King Henry VIII and his sixth and final wife, Katherine Parr.

The next part of the trilogy, “The Virgin Trial,” was commissioned by the Stratford Festival, where it debuted in 2017. Part three, “Mother’s Daughter,” also commissioned, had its world premiere at Stratford this summer.

Impressively, at the same time, Cygnet Theatre is presenting the U.S. premiere of “The Virgin Trial.”

It’s 1549 and the spotlight is on young Bess (Olivia Hodson), who will become Elizabeth I if she can survive the insidious maneuvering of her venal, self-serving extended family.

Still grieving for her father, King Henry VIII, who recently died (a decade after her mother, the ill-fated Anne Boleyn lost her head), 15 year-old Bess has been summoned to the Tower to undergo a blistering interrogation, intended to determine her part in the perfidious plot of her stepfather, the Lord High Admiral, Thomas Seymour (Steven Lone, effectively reprising the seductive role he assayed in the prior Hennig play), and to confirm the rumors that she had an affair with him and may even be pregnant by him.

Her inquisitors are Thom’s brother, the Lord Protector (Tom Stephenson) and his menacing sidekick, Eleanor (Lisel Gorell-Getz). In other rooms, they’re also questioning (and torturing) Bess’s chief minders: her governess (Monique Gaffney) and fey accountant (Wil Bethmann), who take a serious hit — something akin to the rack, and bone-chilling waterboarding — for their unswerving loyalty.

The questioning of the diabolical duo is clearly intended to intimidate and undermine Bess, and bend her to their own duplicitous ends. But they badly misjudge their adversary.

As Bess, the magnificent Hodson displays steely, ramrod-straight posture and unswerving focus, accompanied by a vibrating intelligence and an arrogance that belie her years.

There’s a good deal of historical exposition needed to establish the setting and backstory. The interrogation is relentlessly intense and the torture is brutal. Coupled with physical and sexual abuse scenes, there’s too little time for respite, though Hennig does make faint attempts at humor. The play needs more room for the audience to breathe, and momentarily relieve its anxiety.

Under the keen, perceptive eye of director Rob Lutfy, the cast and production are outstanding. The set (Elizabet Puksto) captures the past/present dynamic of the play, which is historically-based (with much poetic license and liberty) but written in decidedly modern, spicy language. Issues of sexual consent, victim-shaming and paternalistic subjugation are totally of the moment. But they’re also, unfortunately, timeless.

The interrogation room, stark, metallic, polished, is strung with menacing strips of black ‘caution’ tape. It could be anywhere, any era, though it feels minimalistically contemporary.  The glaring lighting (Chris Rynne) and piercing sound (Maeann Ross) underscore the steely, chilling storyline. The provocative costumes (Veronica Murphy) are deliciously time-spanning as well.

Though the performers give their all, the characters, except for Bess, aren’t fully fleshed or multi-dimensional. We get no real sense of who Bess’ underlings are. Her interrogators give the wonderful Gorell-Getz one note to play: stern, severe, punitive, and pretty terrifying. Stephenson’s false bonhomie and menacing congeniality present a more complex picture, which is even deadlier. Caldwell’s Mary is something of a cipher, though she has a bit of an arc: skeptical at first, and then protective.

But this is Hodson’s show, and she commands it with a focus and fervor that are stunning and unnerving. Her Bess knows exactly what she wants, and makes sure she gets it. With her disquieting mix of unfeeling imperiousness and adolescent petulance, she will embark on a campaign to ensure the image of her virginity and her ascension to the throne — and will go on, as we know, to rule for 44 years, forever transforming her country.

“I will never marry,” Bess reportedly said when she was eight years old. Another noteworthy quote from the real Elizabeth: “Though the sex to which I belong is considered weak, you will nevertheless find me a rock that bends to no wind.”

Or, as Kate Hennig would have it, never underestimate the power of a woman, budding or fully formed.