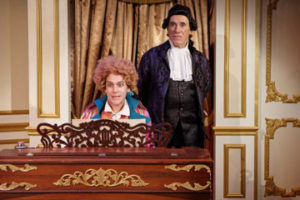 It’s the story of the buffoonish man-child Wolfgang Amadeus Mozart, as seen through the eyes of Antonio Salieri, composer and arch-rival in late 18th century Vienna – though the trusting and naïve Mozart had no idea of the green-eyed monstrousness of his colleague.

The riveting 1979 Tony Award-winning drama and its Oscar-winning 1984 film adaptation play fast and loose with historical truths; Shaffer called it “a fantasia based on fact.”

When we first meet him in 1823, Salieri, old, infirm, wheelchair-bound and nearing death, is looking back three decades, to recount and repent his extreme jealousy of Mozart, and his contributions to the gifted prodigy’s death, in poverty, at age 35.

A devout Catholic, Salieri had made a devotional pact with God, but he felt abandoned when it became clear that the Almighty was made manifest in the transcendent creations of the silly, debauched but brilliant young man. Amadeus does, in fact, mean love of God, or God’s love, and the play is a pointed consideration of God-given talent and the lack thereof.

Salieri was never charged, reviled or totally forgotten. His works are still performed, thanks to increased interest after the play premiered.

It’s a monumental story, and North Coast Repertory Theatre has given it a spectacular production, under the incisive and insightful direction of Richard Baird. His cast of ten is uniformly marvelous.

At the center, as Mozart, Rafael Goldstein is alternately juvenile, jocular, puffed-up and positively beatific about his music. In a tour-de-force performance, Tony Amendola, who is actually fluent in Italian, makes Salieri a multi-faceted Iago, a man of many colors, shadows and demons who is miserable in every sense of the word.

The set is aptly gilded, the costumes are splendid and the music is heavenly.  You’re guaranteed to be transported, enlightened and enraptured.