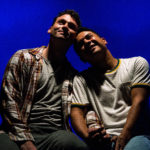 We’ve all been there a time or two. Sitting stiffly in a car or movie, next to someone you kind of like, wondering if the feeling is mutual and if anyone is going to make a move.

Small-town Nebraska, 1993, the summer after high school and the Next Big Step.

Mike, the school jock, is headed to Lincoln on a full scholarship, going pre-med to please his doctor father. But his real love is music.

Will has no plans. He’s just happy to be out of the place where he was bullied and branded with homophobic epithets.

Seemingly out of nowhere, Mike calls Will and invites him to the drive-in. Over the course of the summer, they watch the same lousy, violent, superhero space alien adventure. All the built-in uncertainty and anxiety of first love are exacerbated by Mike’s ambivalence about his sexuality and self-acceptance. It’s music that unites these teens in search of connection and identity.

Mike makes Will a mixtape which, as we all recall, was the 1990s language of love. They both adore the songs, singing them separately and together.

The set is crafty and flexible, the costumes character-defining. The book, by composer/lyricist/playwright Todd Almond, makes it all seem haltingly, self-consciously real.

And the performers are superb.

Shaun Tuazon is adorably ingenuous, with his malleable face shifting wildly between adolescent elation and deflation.

Over 80 riveting minutes, savoring the bittersweet evolution of first love, we get lost in the story – and in our own fraught — and fruitful — reveries.