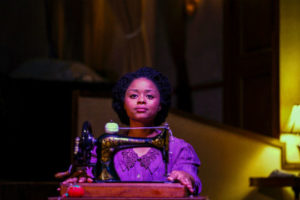 A woman alone in New York can be a treacherous enterprise. Especially in 1905, when immigrants are flooding the city, there’s a migration northward from within the country, and there are rigid societal divides according to race, religion and class.

But Esther Mills lives in a safe boardinghouse. And she has a valuable skill that allows her to cross those boundary lines: she’s a seamstress who makes lacy lingerie.

And she has a dream.

For 18 years, she’s been saving — so she can set herself up in a snazzy beauty salon for African American women. She’s 35. Life and love may be passing her by.

But then, seemingly out of nowhere, a laborer on the Panama Canal begins a correspondence with her. Though she can’t read or write, she has someone answer for her, and after a while, she’s fallen in love and he has proposed.

Things are looking up and she prepares for marriage, contentment and dream fulfillment.

That’s how the first act of “Intimate Apparel” ends. But the good times won’t last.

Esther is beset by betrayal from every direction. But she is an indomitable woman. She will endure, survive, start over and, we assume, succeed.

It’s a heartbreaking story in some ways, but also an uplifting one, inspired by old family photos unearthed by playwright Lynn Nottage. In fact, though Nottage knew little else about her, her great grandmother actually was a seamstress who made intimate apparel. The playwright used the names of her great grandparents — Esther and George Armstrong — for her characters, paying homage to them so they wouldn’t be forgotten, imagining a life and world for them to keep them alive.

At New Village Arts, under the meticulous direction of Melissa Coleman-Reed, the heart-rending drama is getting a lovely, sensitive, aching production, aptly cast in sepia tones (lighting by Michael Rathburn).

The costumes (Jojo Siu) are attractive and era-defining, and the sound (MaeAnn Ross) and original music (Charles Glaudini) add a layer of syncopated context.

The performances are uniformly excellent.

At the center, Tamara McMillian (way too pretty for the Plain Jane she’s described as), is wonderfully still, wide-eyed and centered as Esther. Milena (Sellers) Phillips sparkles as her busybody but compassionate landlady. Gerilyn Brault is deliciously supercilious but fascinated as her wealthy, barren, desultory white customer. Cashae Monya has electric energy as her unjudged, untrammeled prostitute-friend. Taurian McLeod is marvelous as George, the Panamanian who isn’t what he seems — but neither is New York what he expected. And Tom Steward makes the lonely Orthodox Jewish immigrant fabric-seller a man of heart, hope and principle (though oddly, he has far too many fringes on his prayer shawl undergarment).

In this changing turn-of-the-century world, on the cusp of automation and women’s suffrage, as New York is fast becoming the great melting pot, each of these compelling characters is an outsider of some sort, marginalized and/or oppressed, struggling to find a niche, independence and connection.

Nottage, a MacArthur “genius” fellowship recipient, the only female two-time Pulitzer Prize winner, gives us, as always in her provocative plays, strong women who are not easily beaten down.

In this NVA production, the fabric, like the women, is sturdy, but delicately stitched and finely trimmed.