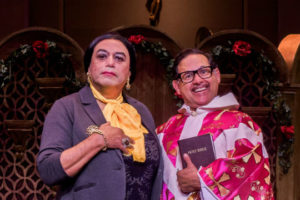 Take one part Shakespeare, 3 parts Molière, a soupçon of Oscar Wilde. Toss in a sprinkling of banda music, macha feminisma, narco-traficantes and telenovelas. And what do you get?

As in “The School for Wives” (Molière), an older man has a young girl sequestered in a convent, groomed to be his innocent, subservient wife. As in “The Importance of Being Earnest” (Wilde), he has a different identity in the city and the country, using Wilde’s names (Ernesto for Ernest or earnestness) and Bunbury for the practice of deception.

The young woman, it turns out, despite being raised by nuns, is far more smart, savvy and sassy than anticipated. Left alone for a moment in the Sinaloa train station, she’s smitten, “Romeo and Juliet” style, by the romantic young son of the old geezer’s  rival narco-capitán. The joven’s mother is a powerhouse, eye-patched banda singer. The young woman’s crafty  chaperone is Siguenza in drag. The closeted gay priest is Siguenza’s early partner in crime, Culture Clash co-founder Ric Salinas.

And weaving through all the Mexican mayhem, in a stroke of wild musical imagination (and a score by Nortec Collective founder Bostich) is a facetious sousaphone player (Adrian Kuicho Rodriguez).

Sounds wacky, and sometimes silly, but there are plenty of well-earned laughs. And there’s lots of language: of the swearing, and the Spanish, variety (some translated, some not). But the comedy is broad, the storyline is crystal-clear, and the sly literary references add delicious heft.

This is one of Siguenza’s most successful comic creations for the San Diego Repertory Theatre. And Rep artistic director Sam Woodhouse helms the piece with a light, entertaining touch.

The cast is excellent all around—committed comic players, all.

John Padilla, as the humorously Bunburying paterfamilias, even gets to display his singing chops. As his rival’s widow, multi-talented Roxane Carrasco shows her chops, her gams, and her comic brio, too.

Salinas is funny, as always, in two roles, as are Salomón Maya and Daniel Ramos III, as the henchmen and the hotties.

Siguenza plays his quirky, bottom- and top-heavy character straight (as it were), instead of outrageously over-the-top, which makes Armida wiser and funnier.

Best of all, the macho-man gets his comeuppance, and the women win the day.  İViva la mujer!