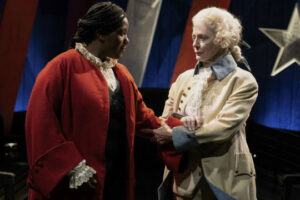 You’re undoubtedly familiar with several Presidential triple-initials (they pop up in crossword puzzles all the time): FDR, JFK, LBJ.

But JQA? Not so much.

John Quincy Adams (1767-1848) was the 6th President of the United States. He was the son of Founding Father John Adams, and served nine terms in Congress, as well as being, at various times in his career, U.S. Minister to the Netherlands, Prussia, Great Britain and Russia.

He firmly believed in government for the people, but he was a one-term president, replaced by the antithetical and incendiary populist Andrew Jackson, who championed virtually no government at all.

Their philosophical/political confrontation is central to Aaron Posner’s 2019 play, “JQA,” where the playwright most clearly shows his cards.

His creation, he insists, is “not a historical fiction; it’s fictional history. We’re not pretending to be historically accurate; we’re just pretending.”

This is really a story about us, today, about what we want America to be, and about what makes an American.

In a series of fictitious encounters, Posner lets us hear from George Washington and Abraham Lincoln (both were, in fact, contemporaries of Adams  — respectively at the end, and beginning, of their careers). And we get a visit from Frederick Douglass (who, like Lincoln, was “in” San Diego quite recently, in “Necessary Sacrifices” at North Coast Repertory Theatre).

Those are juicy cameo appearances, intended to represent the full spectrum of American political sentiment then, now, maybe always.

Likely inspired by the game-changing musical, “Hamilton,” Posner upped the ante in his play, calling for a small, diverse cast. Each of the four actors plays Adams at various ages and stages of his life, as well as several other characters.

At the San Diego Repertory Theatre, there are two women, two men: two black, one white, one Latinx. A coral-colored frockcoat is the constant as each takes on the role of Adams.

Otherwise, in this deftly filmed production (film director, Tim Powell; stage director, Sam Woodhouse), the wigs (Peter Herman) and costumes (Anastasia Pautova) change quite effectively, as we are taken through the years, beginning in 1776, when JQA was 9 years old, ending in 1847, a year before his death at 81.

What we see is how things may change, but as a fickle and decidedly unstable nation, things remain stubbornly the same.

We’re still arguing about the rights of women and people of color. We’re still rejecting and/or disparaging immigrants. We still can’t decide whether some are “more American” than others, and how much of our lives should be regulated, or facilitated, by government.

Posner tries not to be doctrinaire or one-sided; he has reported that MAGA-cap-wearing young people were moved by his play as much as young Democrats or liberals.

As in all other circumstances, it seems, we see and hear what we want to, or agree with.

What I heard was a thematic through-line from JQA’s mother, Abigail Adams (real quote!): “Do good and do right.”

There were many other memorable, plausible comments from the rest of the historical figures on view.

For the San Diego production, emerging a year after the show’s premiere at Washington, D.C.’s Arena Stage, which commissioned it, Posner added a new scene.

Set in 1829, it has Adams visiting an aging James Madison in Virginia, shortly after the end of JQA’s presidential term.

“The danger he’s doing is unimaginable,” he says of Jackson, a statement that echoes down the years. “This unscrupulous, arrogant, willful know-nothing. Did you ever imagine it could get this bad?”

And Madison, a Founding Father, Constitution-drafter and former President, says, “We did our best to predict ‘No!’ [But] things change. It’s the only constant… He will not be President forever.”

Striking a more personal note, the two men commiserate about the difficulty of fatherhood (three of JQA’s children died young). Both admit to having been “terrible,” absent fathers. In earlier scenes, we learn that Adams Senior was also very poor at paternal presence, kindness or involvement.

There are poignant scenes with JQA and his put-upon wife, Louisa.

But the father-son motif and the family theme in general are metaphorical, the paterfamilias standing in for the head of the country, his more expansive family, and how attentive he is to the job (the ‘new’ Scottish activity, golf, is mentioned derisively as a diversion). “No one ever tells you how complicated, uncomfortable and awkward fatherhood can be,” says Madison.

Timeless questions are posed: What has to be sacrificed for a man’s (a person’s?) career and ambition? What’s the cost of compromise (also considered in The Roustabouts’ current filmed production, “Roosevelt: Charge the Bear”), a doctrine strongly recommended to JQA by his arch-rival and Secretary of State, Henry Clay.

“Compromise gets things done,” Clay says to the dour, intractable Adams. He also advises, less felicitously: “Keep ‘em terrified and you can sell ‘em any damn bill of goods” (a philosophy also espoused by that notorious Nazi, Hermann Göring).

Clay is followed by Andrew Jackson in the same year, 1829, shortly after his landslide victory. The new president accuses JQA of being an “egghead,” and Adams retorts that Jackson is “small-minded” for thinking that “the best government is the least government.”

“You want government to pay for science, arts, doctors, food? That’s such an intrusion in people’s lives,” Jackson ripostes.

The new president also defends having slaves, which JQA calls “an embarrassment to this nation.” But not to Jackson, who thinks “Slavery is good for the country, as American as apple pie.”

Every argument here has a counter-argument, and who better to counter this claim than statesman and former slave Frederick Douglass?

JQA insists that “the Union will not survive,” that the abolition of slavery would “tear the country asunder.” Douglass reminds him that one in every four people in the country is a slave.

“Imagine if our roles were reversed,” he says. “Can you honestly say that I’m wrong?” JQA cannot. “Then do more,” Douglass urges.

In 2020, another fraught, divisive time in our checkered history, we all could do more.

And therein lie some of the weaknesses of the play and the production.

The text’s modern-day relevance is a little too preachy, too on-the-nose. And at the Rep, despite a uniformly wonderful, malleable cast — Larry Bates, Crystal Lucas-Perry, Jesse Perez, Rosina Reynolds — the tone is too earnest, too didactic, too shrill. There’s entirely too much yelling and speechifying, and no apparent effort to mine the sly humor that lurks in all Posner’s work (“Stupid F***ing Bird,” for example).

Still, the playwright gives us a good deal to chew on, to contemplate, to take to the ballot box. And his play encourages us to consider the broad view, to see how the country has, throughout its history, repeatedly advanced socially and politically, and then retreated, only to begin the cycle again.

It gives one hope that this massive ship will right itself once again.