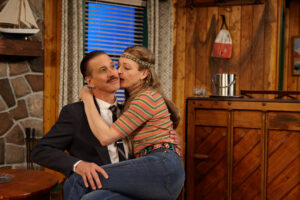 In these socially distanced days, some of the best theater — filmed or Zoomed — takes the form of solo pieces, extended monologues or soliloquies that allow for a full range of emotion with no awkward interactions.

In two-handers like Bernard Slade’s “Same Time, Next Year,” the only way to manage the various Close Encounters of the Romantic Kind, is by hiring a real-life couple.

But whether the problem is the 1975 play, or this filmed production (effective cinematography and editing by Aaron Rumley), it doesn’t rise to the “hilarious” heights of the theater’s billing.

The setup is intriguing enough, if not as titillating, perhaps, as it once was.

Since they first met-cute in a NorCal hotel bar and tumbled into bed, George and Doris, both married to other people, have continued meeting every year, at the same time and place, over 2½ decades (the same excuses hold with the spouses:  his business trip, her church retreat) to share a weekend of total escape, a tryst free from responsibilities, unencumbered by family obligations, rife with love, sex and honest, open conversation. Totally satisfying in every way.

But then, there is the guilt; George is the more neurotic, paranoid and guilt-ridden of the two (he’s sure from the get-go that his telepathic wife knows all about his indiscretion; and much later, it turns out she did).

We watch George and Doris change over the decades (era-defining hair and wigs by Peter Herman, costumes by Elisa Benzoni), as she develops her confidence, educational achievement, business acumen and feminist consciousness.

He is on the opposite trajectory: a successful accountant, he begins to sour on his milieu of money and greed, deciding instead to downsize and simplify.

The socio-political goings-on (The Vietnam War, civil rights, women’s liberation) propel their personal changes, but they provide only a hazy backdrop to the more quotidian happenings.

Over the years, the pair experience loss, death, births (one in the hotel room) and a near breakup.

But their relationship remains strong, and lovely, though for the audience (well, this observer in particular), there may not be the promised “laughter and tears.”

It’s a pleasant fantasy, with a lively pace and genuine commitment, but there’s the faint scent of mustiness about the piece.

The set (Marty Burnett) looks more like a rustic ski chalet than a hotel room (all that wood, plus a fireplace — and a piano! Thanks, Cris O’Bryon, for the music).

Turk nicely feigns playing “their” song, the one they heard on the night they met in 1951: “If I Knew You Were Comin’, “I’d’ve Baked a Cake.”

A little corny, maybe, but a rom-com might be just the (theater) ticket in these stubbornly stressful times.