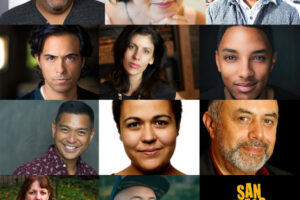 In the wake of the death of George Floyd, and the ensuing Black Lives Matter marches and demonstrations, organizations nationwide are scrambling to expand their diversity and inclusivity.

The 44 year-old San Diego Rep has diversity baked into its Mission Statement, which specifically mentions “inclusive theater,” and specifies further: “We promote an interconnected community through vivid works that nourish progressive political and social values and celebrate the multiple voices of our region.”

They have done an enormous amount to further that goal, and yet, says literary manager Danielle Ward, “In the past few years, we’ve been evaluating our productions to see what underrepresented voices were missing.”

They realized that they’ve never had plays embodying the viewpoints of Native Americans, Filipino-Americans, queer/transgender or Black Americans.

“Over the past few years,” says Rep artistic director Sam Woodhouse, “we’ve been maintaining an ongoing relationship with playwrights who speak in these voices.”

What they came up with is a new play commission series called “Here U.S. Now,” which features six playwrights and five different plays that will be developed with future Rep seasons in mind.

“We have an ongoing relationship with these playwrights,” Ward explains. “We asked them what they’d want to9 write about, what’s pertinent to them now, possibly centered around the local region.”

These are all brand-new works, though some were already in the minds of the writers. The Rep contacted them in March, says Woodhouse, “as soon as COVID started happening. We were trying to figure out what we could do to support artists.” The Rep had some initial layoffs, but has retained more than 20 employees since the pandemic set in.

The deadline for “Here U.S. Now” submissions is November 1 for an initial draft. The writers are contracting for three drafts, over a period of months. The play is for some plays to be ready for the end of the current season, which would be about May of 2021.

Although they reached out to male and female playwrights, the five plays chosen are all be male-identifying writers.

“We also commissioned several short pieces from female playwrights who were already familiar to us and our audiences,” adds Ward. ”We asked for short plays, under 15 minutes,”

The pieces, all audio- or online-based, by playwrights, Caridad Svich, Elizabeth Irwin and Diana Verbano  will be ready for production within the next few months.

“Because of the constraints of producing right now, and in the interest of obtaining more than monologues,,” explains Ward, “I asked if anyone might like to try writing for a sock puppet. And Elizabeth Irwin was interested.

“These pieces will be part of our online programming,” says Woodhouse. “The readings will be done first. The full-length plays will be produced down the line in years to come. There will definitely be a development process, with readings online or open to the public, or in-house internal readings over time.  These are steps in the [new play] development process.

The five plays in the “Here U.S. Now” series include the following:

“Beyond the Crossroads,” by Idris Goodwin and K. Quinn Marchman, an online exploration of African American folklore that casts the audience as members of a band as they follow the story of legendary bluesman Robert Johnson, who sold his soul to the devil in exchange of otherworldly guitar-playing skills. The play invites audience members to discover what they would be willing to give up in exchange for their wildest dreams.

“The Butterfly of Chula Vista,” by Giovanni Ortega, Is a fast-paced screwball comedy that follows Libertad Molina,  Mexi-Pino (Mexican-Filipino American) as he embraces his many layers by performing drag at GG Island Grindz Bar & Grill in Chula Vista. The play touchis on themes such as familial duty, identity and acceptance.

“Duty Free,” by Boni B. Alvarez, explores the experiences of various immigrants seeking entry into the U.S., including Filipina journalist Merlina Rojas, seeking refuge in this country after having been named an ‘enemy of the republic’ in her own.