“I’LL BE SEEIN’ YA,” streaming from CTGLA (Center Theatre Group) 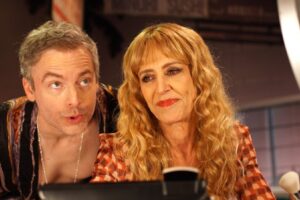 There have been many plays about broken people breaking down, losing their grip on the reality of the present and/or past.

Now comes “I’ll Be Seein’ Ya,” a world premiere by Jon Robin Baitz (Tony nominee and Pulitzer Prize finalist for “A Fair Country,” 1996), who has been acclaimed as a “playwright of conscience.”

Several of his notable works have been produced in San Diego: “Three Hotels” (San Diego REP, 1994), and at The Old Globe, “The Substance of Fire” (1996) and “Other Desert Cities” (2011, which also features a sister who never got over her brother’s death, with a stint in a psychiatric hospital to prove it).

Here, the main character is broken-down when we meet her — on a fixed income, in an L.A. apartment, having crazed conversations with herself, the ghost of her brother, the local pharmacy answering-machine (as she desperately seeks much-needed meds), and more.

Alice “Allie” Murchow (the estimable Christine Lahti) is still living in the past, when she and her family sort-of rubbed shoulders with some Hollywood greats (Dyan Cannon, Elizabeth Montgomery, Goldie Hawn, Eydie Gormé). Her father worked in the MGM cutting room, her mother in the Paramount wig department, her brother as a stuntman, and she as a sometime extra, but mostly a department store makeup artist who still extols the virtues of “smoky eyes.”

Those days — and family members — are long gone, but Allie frantically clings to them, like the high school quarterback who never accomplished anything after that adolescent peak.

Besides being antic and delusional, she’s been selfish, and she abandoned her dying brother to meet up with an undependable boyfriend.

She’s unappreciative of her concerned Iranian neighbor (Sussan Deyhim), who actually took care of Allie’s brother as he succumbed to AIDS, and the compassionate young pharmacist (Christopher Larkin), a total stranger who heard her on the phone and knew she needed help.  Both are hapless roles, mere props for Allie to ignore, though they’re well played, and Deyhim gets to sing a beautiful Persian song.

All of this (which is really not much) takes place in 2020, against the backdrop of the COVID pandemic and the Black Lives Matter street protests following the police murder of George Floyd.

Sirens form the soundscape, along with various people (and recordings) singing snippets of the title song (written by Sammy Fain and Irving Kahal in 1938), whose actual title, unlike the slangy colloquial version Baitz employs, is “I’ll Be Seeing You.”

Each of the five scenes, that take place over the course of two days, is named for a line in the song (“I’ll Find You in the Morning Sun,” “In Everything that’s Light and Gay,” etc.).

But when all is said and sung and done, what’s the point? There is no conflict (the cornerstone of drama) and no real narrative arc.

In the last scene, the main character, who repeatedly asserts her Jewishness (for no apparent reason), finally confronts the graves of her family, which include a blank footstone for her. These are gravesites she’s never visited before, though she’s been to the tombs of many of the stars she ‘knew’ in the same Westwood Cemetery.

If that’s her moment of realization and self-awareness, it’s pretty tepid stuff.

The play is a four-person setup for a character study, with two characters so ancillary as to be unnecessary. Only her brother Japhy (Justin Kirk) serves a function here, calling her out, telling it like it really was, serving as her reality-check. But so what? She never acknowledges her participation or culpability in anything that’s happened in her life.

It feels more like an exercise than a fully-realized play. Good thing it’s only being presented as an online stream (it was filmed in November 2021 at CTG’s Kirk Douglas Theatre); it would be a shame to get all dressed and masked for such a slight venture.

The set (designed by Myung Hee Cho and Yuki Izumihara), is aptly stark and suggestive, almost like a reverie (it occurred to me that maybe Allie is dead, too, with her footstone already filled in).

The costumes (Ruoxuan Li) are oddly garish and unmatched for Allie, unremarkable for the others.

Not to take anything away from Lahti’s performance, which is outstanding, if outsized. If only we could care at all about her character, so resentful of everyone else, and so put-upon because a protester calls her ‘privileged.’

Kirk is also excellent, and more interesting, as her pallid brother, always bathed in a ghostly grayish light (Pablo Santiago). He’s sarcastic, cynical and coolly disparaging (which was also, apparently, true of their parents).

The Baitz plays I’ve seen all focus on caustic, supercilious characters, self-serving and heartless people who will do anything (especially delude themselves) to justify their venal acts.

Not the most cuddly or likable folks to spend an evening with, even at home.