“BLUE/ORANGE” from the Fenix Theatre Collaborative 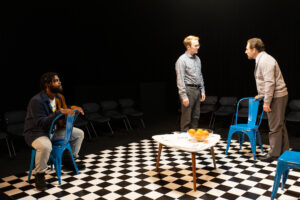 With doctors so beleaguered over the past two pandemic years, it’s hard to take swipes at them.

But psychiatrists in particular have always been ample targets for hyperbolic potshots.

English playwright Joe Penhall went after them with a vengeance in his Olivier Award-winning 2000 work,“Blue/Orange.”

Last seen locally in 2003 at The Old Globe, the play is now getting a searing production from the Fenix Theatre Collaborative, formerly known as The Eastern. As Managing Artistic Director Justin Allen Slagle and Artistic Director and Vision Curator Stephen Schmitz tell it, the change (they call it a “rebirth”) was both geographically and dramatically necessary.

The Eastern made an auspicious debut in 2019 with the regional premiere of the goofy/funny Harry Potter riff, “Puffs: Seven Increasingly Eventful Years at a Certain School of Magic and Magic.” (The show will return this summer, 7/7-8/13). Their original intention was to produce theater in San Diego’s East County. But the lack of theater space in that area “meant the name was potentially more confusing than helpful.”

The pandemic gave them time to re-think their mission, and they realized that they should “constantly be reinventing ourselves, not just this once.” Hence, Fenix, with its suggestion of endless renewal. The spelling is “a nod to Spanish-speaking roots and place names of San Diego and because, well, we are very much not located in Phoenix.”

So, their sophomore effort, “Blue/Orange,” supposedly sardonically humorous (and certainly exaggerated and caricatured), posits the familiar contention that shrinks are as crazy as their patients.

Staged at the Tenth Avenue Arts Center in downtown San Diego, on a raised square platform, with audience seats on three sides (the rest of the spectators are in the ‘bleachers’), the three-character drama, set in a London National Health Service mental health facility, could be viewed, as it was in the London premiere, as a boxing ring.

Or, maybe you could see it as a tripartite personification of the Freudian concepts of id, ego and superego.

The patient, Chris (Xavier Carnell Daniels), admitted for a 28-day evaluation, has been diagnosed with Borderline Personality Disorder (i.e., straddling the line between neurosis and psychosis). With his antic, volatile behavior and restless-leg anxiety, you could be see him as representing the id, the primitive, instinctual part of the mind that contains aggressive drives and hidden memories.

The superego operates as a moral conscience. Here, that would be Bruce (Patrick Clark), a young, rule-following doctor (same age as the patient, as it happens), in his first month of training. He’s convinced that Chris might be a paranoid schizophrenic and should be submitted to further evaluation instead of being released to who-knows-where.

The ego here (and boy, does he have one), is Robert (Charles Peters), the arrogant consulting psychiatrist who is Bruce’s supervisor and supposed mentor. Ego, according to Freud, is the sense of personal identity or feelings of self-importance.

Superciliously quoting French poetry and Allen Ginsberg and “Hamlet,” Roberrt makes the issue of Chris’ diagnosis and discharge all about race, by arguing that the Black community is frequently mis-diagnosed by an institutionally racist system. Sounds reasonable, except he’s a total hypocrite, and is also closely monitoring the clinic’s bottom line. He wants Chris released to save money and he wants to take over the case so he can use Chris for the book he’s writing, which will hopefully make him a professor and elevate him to the ranks of his more prestigiously-educated peers. Throughout, Robert is self-serving, condescending and denigrating.

The power dynamics shift constantly. Each of the three men seems reasonable at some point, and each has a complete emotional meltdown at another moment.

Penhall makes the two doctors both unlikable and unprofessional: arguing about the patient in front of him, using and manipulating him for their own wants/needs.

There are issues of class, race, prejudice and clinical practice here. The audience is buffeted about as much as Chris, who seems as confused as he is deluded.

Chris sees oranges as blue, and he reports his father to be either the reviled Ugandan despot/dictator Idi Amin or the revered boxing champ Muhammad Ali.

Daniels gives a thoroughly credible, explosive performance as Chris. As Bruce, Clark is more calm, reasonable and empathic — until he isn’t, once his career is threatened and he loses his cool. Peters’ Robert is a slippery shark, with both the other characters in his sights as prey.

Under the taut direction of Kian Kline-Chilton, a recent SDSU graduate, the tension is high, but the confrontations are too close for comfort (or professional ethics) and the rapid-paced speech and yelled outbursts often make the dialogue difficult to understand. Complicating matters further, the cavernous, high-ceilinged space doesn’t do unmiked speakers any favors.

After all the posturing, pontificating and menacing intimidation onstage, the audience is left uncertain and unfulfilled at the end (a problem of the play, not the production). Some of the details of English Healthcare elude us, but there are enough intercontinental similarities to keep us engaged, especially given our own problems since so many psychiatric facilities were shut down, leaving thousands of homeless mentally ill people to wander America’s streets.

Though billed as a brutal comedy, the play doesn’t offer much to laugh at. The issues at stake are no joke — for doctors, patients (and prisoners!) of color, and for the entire healthcare and psychiatric system.