“iNTO THE WOODS” from New Village Arts and Oceanside Theatre Company 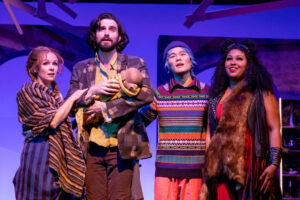 In her Program Notes for “Into the Woods,” director Kristianne Kurner reminds us that the Stephen Sondheim/James Lapine musical had originally been scheduled for May 2020. And we all know how that turned out.

When she revisited the show (which had its world premiere at The Old Globe in 1986) for the current co-production of New Village Arts (of which Kurner is the co-founder/artistic director), with Oceanside Theatre Company, she discovered a timely new relevance.

Having read that before the show began, I found that certain lines leapt out of songs or dialogue, that would not necessarily have been highlighted or underscored before:

“Everything is different than before”

“People are dying all around you”

“You want someone you can blame”

“When will things return to normal?”

Thanks to COVID, we’ve all been through so much in the past two years — it might as well have been perpetrated by “giants in the sky.” But the show reminds us that we’re better at getting through difficult times together, and “truly, no one is alone.”

The musical was always bittersweet (moreso now, since Sondheim’s death last November). Perhaps not the master’s most subtle work, it tells and then twists familiar (Brothers Grimm) fairy tales, ultimately pulling back the curtain to show what happens after all these so-called fairytale endings.

As in all Sondheim shows, amid the fiendishly intelligent lyrics, there are words of wisdom and lessons to be learned.

But most pertinent right now are the ideas of rational re-consideration: re-thinking our dreams and fantasies, re-examining ourselves and what we’re capable of doing — alone and with others.

It was a felicitous choice — and has resulted in a pointed, potent, expertly sung production.

The miking was erratic at the performance I attended, rendering the ever-clever lyrics difficult to understand at times (especially in rapid-fire numbers like “Greens Greens”).

But the acting singers are excellent, and the comedy is well played.

Cinderella (delightful Megan Carmitchel, who also served as dance captain) is irresistible, and The Witch (Rae Henderson-Gray) is, as you’d expect, nasty and scary and over-protective of her daughter (Rapunzel), and destructive and spiteful and sometimes pragmatic, though her big transition is a disappointment; I missed the magical quick-change glitzy glam of most productions (Keira McGee’s costumes are otherwise quite inventive).

The spoiled, Bad Boy, privileged Princes, who do double duty, are aptly humorous (Tanner Vydos as Cinderella’s Prince and The Wolf; Kevin Phan as Rapunzel’s pink-haired Prince and the blue-haired simpleton Jack, of Beanstalk fame).

Luke Monday is charming as the hapless Baker, and Sydney Joiner is forceful as his wife. Layth Haddad, as the Steward, moves noticeably well. And Manny Fernandes, who stepped in just before opening as The Narrator/Mysterious Man/Cinderella’s Father, does an admirable job, especially as the Mysterious Man.

Singing to recorded tracks was not problematic (though of course, live musicians are always preferable), but at times, the music overwhelmed the singing.

The show is long, clocking in at nearly three hours, but under Kurner’s deft direction, it moves fleetly, and with emphasis placed a little differently, it carries more heft — as well as useful messages for all.

Careful the things you say; children will listen.