“I AND YOU” streaming from Moxie Theatre 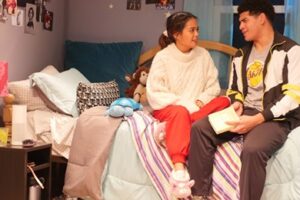 Pronouns and poetry. Adolescents and angst. PopTarts and mortality.

Lauren Gunderson, for a number of the past several years, the most produced living playwright in America, covers a lot of territory in her surprising 2014 play, “I and You.”

The one-act won the Steinberg ATCA New Play Award from the American Theatre Critics Association and was a finalist for the prestigious Susan Smith Blackburn Prize, which recognizes excellence in women who write for the English-speaking theater.

Anthony, a tall, affable basketball player, barges into Caroline’s bedroom. She’s been out of high school for a while (“I’ve been sick pretty much since I was born,” she says) – though she still plans to graduate this year.

He has volunteered to team up with her for an American Lit project, exploring the use of pronouns in Walt Whitman’s “Leaves of Grass.” She knows nothing about this project – and it’s due tomorrow.

Anthony is sensitive, popular (though not too good with girls), an A student, passionate about jazz and poetry.

Caroline is wary, prickly, smart and sardonic, aggressive and dismissive. She doesn’t like poetry — or Anthony.

But his enthusiasm for Whitman’s “Song of Myself” draws her in, as does the poetry itself, and its consideration of subjects large and small, personal and expansive. The importance of our connection to nature, and to each other.

Caroline begins to soften. They share dreams and secrets, likes and dislikes.  It all builds to a hug, a kiss — and an unexpected dénouement.

Moxie Theatre, for whom every month is Women’s History Month (dedicated, as they are to “diverse and honest images of women”), picked a great time to feature Gunderson and her spunky, brave heroine.

This virtual co-production with the L.A.-based Electric Company collective, which focuses on developing young artists, is what the collaborators are calling “hybrid live theater: the audience is live, but the performance is recorded” (in high definition, nicely filmed and edited by Moxie board member John Brooks).

Her cast is outstanding.

Petite, agile Justine Sombilon (a junior at Stanford) and hunky Miles Henry (a sophomore at Fullerton College) are thoroughly believable throughout (except for the first moment of her crying episode).

Gunderson’s crisp dialogue crackles between them, the rhythm and flow of the work are as musical as poetry — or jazz.

She’s feisty and funny; he’s persistently warm and caring. Their interactions, and the evolution of their friendship (and potential relationship?) are conflicted and credible, and a little heartbreaking.

The set (designed for Moxie’s stage by Reiko Huffman) expertly captures Caroline’s “not too girly” room. Too bad we can’t see the wonderfully-described photographs Caroline takes of “what matters” and “what’s really there.” Her long-term illness has certainly given her a different perspective on what’s important.

Given the play’s focus, among other things, on poetry and Whitman’s “Song of Myself,” Moxie put out a call for high school students to submit their own poem, inspired by Whitman’s, for MOXIE’s “Song of Yourself Virtual Poetry Slam” contest. Before each performance of the play, one of the 16 winners will recite their work. The night I watched, Trang Nguyen read his poem that, reflective of the characters in the play, and all teenagers, included this line: “All I ever wanted was to be heard.”

This is as good a time as any to listen — to young people, to poetry, to plays that speak to us of connection in these isolating times.