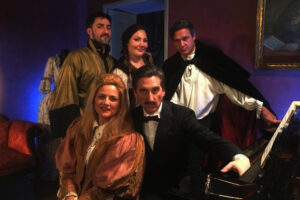 VENUE: Streaming from Italy via the San Diego Repertory Theatre

Giacomo Puccini speaks. About his life, his wife, his indiscretions (“I was not a perfect man, perhaps not even a good man”). About his feelings about men and women and love. About his relationship with the maestro Arturo Toscanini. About why the heroines in all his operas have to suffer and die.

In “Hershey Felder, Puccini,” sometimes the composer talks to us directly. Sometimes he talks to the four opera singers who are bringing his creations to life.

Sometimes he feels sorry for himself. His mother abandoned him (she died when he was 26), and he never got over the loss. (“If anyone knows the soul of Italy, they know there’s only one entity greater than God — your mother”). One might think he was punishing every woman he encountered (real or imagined) ever after.

Despite his admitted shortcomings, he insists, “My devotion to my art was complete.”

He may well have been a genius. Many of his works are beloved and enduringly popular, though even “La Bohème” and “Madama Butterfly” were reviled when they premiered.

In his latest world premiere, the multi-hyphenate Hershey Felder (in this instance, writer, co-director, pianist, star) portrays Puccini as arrogant and somewhat condescending, but also firmly committed to the power of love. (He admits to a lifelong search of, among other things, “beautiful women”).

He’s dismissive of what he considers to be inferior libretti written by “halfwits,” and at times thinks only he himself can get the words right.

He loved his characters, though he tells us they didn’t always love him back.

“My characters,” he says, “accuse me of terrible things: I’m a cheater, an emotional abuser. They say I create them as soulless. But all I am is human, and humanity is all I want for my music…. My characters are not larger than life. Each and every one is just simple pieces of me.”

But think about his females: Mimi (‘La Bohème”) dies in poverty of tuberculosis. Tosca jumps off a parapet to her death. Butterfly commits suicide via seppuku. And the loving and faithful slave-girl Liù (“Turandot”) sacrifices herself to save her beloved and give him a happier life with someone else.

In his disquisitions, Puccini leans hard on men, but includes himself in their shortcomings. “We think we are entitled to anything we want when we want it. I felt this in the music, in the male signature: the augmented, unresolved chord. It’s never enough for men; we always want more.”

“What is it you want from us?,” asks the soprano. “I want unconditional love,” Puccini replies.

The composer, whose family members, going back generations, were church music conductors, pursued secular music instead, falling in love with Verdi’s work at nearly the same young-adult age that Felder himself fell in love with Puccini’s.

Felder gets to play all the best-known, most sumptuous and aching arias — from “Che Gelida Manina” (‘How cold your little hand is’ from “La Bohème”) to “Nessum Dorma” (‘No one sleeps’ from “Turandot”) to “O Mio Babbino Caro” (‘O my dear Father’ from “Gianni Schicchi”) to “Un Bel Di” (‘One Fine Day,’ from “Madama Butterfly”), as they are stunningly sung by four international opera stars: American tenor Charles Castronovo, American baritone Nathan Gunn, Canadian soprano Gianna Corbisiero and Russian soprano Ekaterina Siurina.

Puccini himself? Not a hugely likable fellow. And he does go on.

The two-hour presentation could be shortened (there seem to be several plausible endings; Puccini even comes back to talk to us after his death!).

But the locations of Felder’s production from his pandemic home in Italy are marvelous: the actual house in Lucca where Puccini was born, including the garret he slept in as a child, which inspired the Parisian setting of “Bohème” and his piano, which Felder gets to play — and sing a bit from “Manon Lescaut”); the Teatro di Pisa where Puccini first heard and saw Verdi (“The sound came directly into my body,” he reports).

The filming is high quality (and the settings are superb) with cross-cuts and interspersed archival shots of the real Puccini.

Ever the chameleon, Felder captures the mustachioed look of the man, and — among his other fluent tongues — he speak Italian commendably.

Perhaps it was my laptop, but for me, the synch was off for most of the production on opening night. So it was difficult to watch the excellent singers in their lovely period costumes, because the vocal/visual mismatch was disconcerting.

Felder has made a cottage industry of impersonating famous composers, telling their stories and deftly playing their works (the Montreal-born Felder attended Juilliard as a teen). Several times, he has said he’s done with the pursuit – but then, another master calls. He’s already got “Anna and Sergei” (about Rachmaninoff) in the wings, set to premiere on May 16.

The man is indefatigable. His new works often need shaping and pruning, but another fascinating story is here, briefly, for the watching, by Felder-fans and opera-lovers alike.