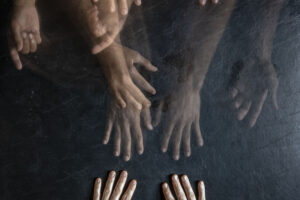 In the near-year since the pandemic upended our lives, and shuttered all performance venues, theater has adapted, morphed and evolved, to meet the changing times.

Plays have been presented virtually or on demand — as readings or staged productions on Zoom. Some have been written expressly for Zoom. Some “live” productions take place an empty theater space; some are filmed onstage or green-screened, or set in various indoor or outdoor locations. Some try to be interactive. Some are audio plays. All try to engage the imagination.

But the Brooklyn-based 600 Highwaymen (a collective of Abigail Browde and Michael Silverstone) are taking, as they say, “a radical approach to making live art by creating intimacy amongst strangers.” Since 2009, they have created eight original works, which have been presented nationally and internationally.

Now, as part of the La Jolla Playhouse’s ongoing series of imaginative WOW (Without Walls) productions, they’re offering us something new and completely different: theater by phone. For two strangers at a time.

This is “A Thousand Ways, Part One: A Phonecall” which, according to The New Yorker, “takes a simple premise and turns it into magic.”

Here’s how it went for me.

At a specified time (and you must be on time), I dialed a number — as requested, from a quiet room, alone, with a strong phone signal.

I was “paired” with another “theatergoer.” We were “directed” or facilitated by automated prompts from a somewhat robotic female voice, which seemed to be responding to what we said (though she wasn’t really, I later realized).

Over the course of about 50 minutes, under her ‘guidance,’ my new friend and I shared a good deal about ourselves — our childhoods, our families, our likes, passions, pastimes and regrets.

At one point, we were instructed to close our eyes and imagine ourselves (all three of us?) together in a shared scenario: a stalled car on a deserted desert road.

We took turns, as in conversation. But there was no room for follow-up questions or free-flowing interaction.

And yet, I was moved and touched and deeply affected by the experience.

I liked his friendly voice, his love of books, his funny childhood memory. When we were told to say goodbye, I was sad to leave him. He had described himself a bit, as I had, but I wanted to see him, meet him, continue the conversation. Perhaps one day, I will (in Parts Two or Three of this ‘”triptych”).

Part One was a brief encounter — but a meaningful one, affecting and effective.

I was forced to think about my own life, and share it with someone I didn’t know and couldn’t see. I was asked to imagine, to remember, to recall sights, sounds, smells and experiences.

“Words are all we have,” the voice told us more than once. “But they’re not always enough. These are only fragments. There will always be something unanswered. Someday, this will be something we talk about.”

And I’ve already been talking about it. The highly imaginative and expertly-conceived piece brought home the power of words, and how they can be used in creative ways to evoke true feeling and real connection.

This was, by far, the most successful of the many virtual WoW presentations I’ve viewed since last spring.

It was structured, but it didn’t feel forced. It wasn’t “live theater,” which we’re all sorely missing. But it served the same functions: a shared experience among strangers that fostered connection and introspection.

I probably wouldn’t want it for a steady diet, but it was brilliant for this moment of isolation and disengagement.

Part Two, “An Encounter” and Part Three, “Collective Experience,” might, it seems, require actual face-to-face interaction, with this partner and others. I certainly hope so.