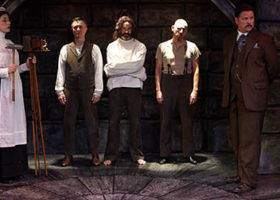 What starts out as a fairly straightforward mystery in Jeffrey Hatcher’s “Holmes & Watson,” takes so many unexpected twists and neck-snapping turns that your head is positively spinning by the end. And that seems just right for a Sherlock story, doesn’t it?

North Coast Repertory Theatre snagged the West coast premiere of this endlessly clever, crafty cliffhanger, and has made a masterful evening of it. Just FYI, this play has absolutely nothing to do with the upcoming spoofy movie of the same name.

As every Holmesite knows, the great detective went over the treacherous Reichenbach Falls in Switzerland, along with his lifelong nemesis. But his body was never found.

When we meet Dr. Watson in 1894, he has spent three years searching for answers. It’s enough to drive a man crazy.

Which brings us to his latest summoning – to an asylum on an isolated Scottish island, where there are three patients who claim to be Sherlock Holmes. Watson’s job is to interview them and determine which is the real Sherlock.

Richard Baird is at his most riveting as Dr. Watson. Perpetually self-congratulatory and wryly amused by his intelligent approach to a befuddling situation, Baird as Watson seems to be enjoying himself immensely. Everyone around him is thoroughly convincing. The lighting, sound and costumes also deserve special mention.

Be prepared for gunshots, menacing moments, hand-to-hand combat, bone-dry humor and ingenious re-enactments of the fateful scene at the Falls.

Of course, to say any more would be to spoil the wonderful, edge-of-your-seat fun.

Wrack your brain if you will, but you’ll never figure out how it all ends up. Just sit back and revel in 85 minutes of sheer theatrical delight.