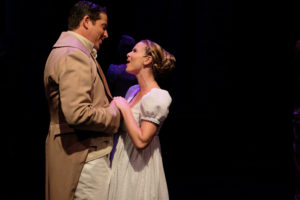 When you think about it, a groundbreaking 200 year-old novel that emphasizes the heroine’s interior monologue lends itself perfectly to musical treatment. Because, how many musical theater songs express the hopes, dreams and inner thoughts of a character?

“Persuasion” was Jane Austen’s final novel, published six months after her death in 1817. It’s something of a Cinderella story, where good-hearted, smart and dutiful Anne Elliot is underappreciated, but over time, she gains insight, assertiveness and a second chance. Ultimately, she makes sure that she marries her one true love.

As was her custom, Austen used irony to satirize the classism and social hypocrisy of her Regency era English times.

In a charming, well-calibrated production, Lamb’s Players Theatre is presenting the California premiere of a 2017 adaptation of “Persuasion,” with music and lyrics by Chris Jeffries and book by Harold Taw.

The story begins with 19 year-old Anne rejecting the dashing young naval officer, Frederick Wentworth, after being persuaded against him for his lack of wealth, by her not-necessarily well-meaning godmother.

Eight years after that broken engagement, the Elliots have fallen into financial distress. Still, a steady stream of men comes to court sisters, cousins and assorted other young women. Anne, now 27 and considered past her prime, holds out for Wentworth. She’s about to acquiesce to an opportunistic Elliot cousin when the now-wealthy Wentworth returns.

The appealing music is beautifully played, with a lilting violin, flute and cello. The lyrics reflect Austen’s sense and sensibilities.

Director Robert Smyth and choreographer Javier Velasco deftly combine ceremony and satire. Seven actors are playing multiple roles, but the characters and classes aren’t always clearly distinguished, though the financial discrepancies are made manifest in the lovely costumes.