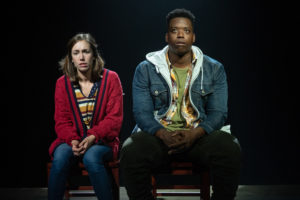 “Fifty percent plus a feather.”

That’s the lowest possible burden of proof, and often how campus sexual assault cases are decided these days, especially when there’s reasonable doubt on both sides.

And there’s definitely reasonable doubt in “Actually,” the provocative 2017 two-hander by Anna Ziegler, now at the San Diego Repertory Theatre.

Amber and Tom are floundering freshmen at Princeton University. They both feel like they don’t fit in – but for vastly different reasons.

Amber spots him and kind of stalks him; when they formally meet, they are mutually attracted. After a kegger, she challenges him to a game of “Two Truths and a Lie.” He’s not interested, but she says he has to play if he wants to sleep with her that night.

Boatloads of alcohol and a dimly remembered sexual encounter ensue. And before you know it, they’re facing a university panel to discuss an accusation of rape.

As the 90-minute drama unfolds, we learn more about the flaws and failings of the protagonists. We hear some of their testimony, a bit of their backstory, and a lot of their inner monologue. Our loyalties and sympathies constantly shift.

This is the power of the play, with its nearly 100% credible dialogue presented by two outstanding performers – Emily Shain and DeLeon Dallas – both MFA alumni of UC San Diego.

This setup could make for a static production, but director Jesca Prudencia, also a graduate of UCSD, keeps the actors moving and the audience engaged.

The stage features just a wood floor and two chairs. But the situation – in the play and on college campuses nationwide – is anything but stark, simple, or black and white.

“Actually,” which was Amber’s only inebriated expression of non-consent, raises many questions. The ambiguity continues to the very end. Truth, which is on everyone’s mind these days, is sometimes slippery and elusive.