“FRANKIE AND JOHNNY IN THE CLAIR DE LUNE” at OnStage Playhouse 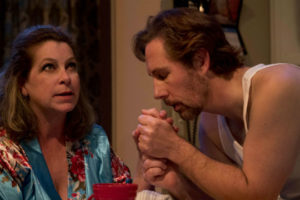 “People are given a moment,” Johnny tells Frankie. He’s ready to grab the opportunity by the horns. Frankie’s a lot more skeptical, but Johnny’s sure he’s found everything he wants in Frankie’s Hell’s Kitchen apartment.

These two flawed, “not old, not young” New Yorkers are dragging around a good deal of baggage, and it’s not at all clear that they have a matched set.

But one moonlit night in 1987, after they tumble into bed (they’re post-coitally panting when we first meet them), they realize that they may be getting another chance to start over, and if not to make things right, at least better.

The duo, who work together at a diner, recognize the irony of their joined names – reflections of a traditional American song about love, infidelity and a crime of passion. But Johnny, who considers himself to be “nervy and persistent,” is hellbent on making sure this story has a much happier ending.  The self-deprecating Frankie isn’t so sure. She thinks she’s “a BLT sort of person; I think you’re looking for pheasant under glass.” (He’s a short-order cook, and makes her a Western onstage).

By the light of the moon (translation of “clair de lune”), they spend a night together – arguing, resisting, denying, persisting and ultimately falling in love.

At one point, Johnny calls into a classical radio station and requests “the most beautiful music ever written” The all-night DJ dedicates the lushly romantic “Clair de Lune” of Claude Debussy. The music eases them into love.

Jennifer Peters, in her professional solo directing debut, has chosen her cast expertly; Teri Brown and Charles Peters (the director’s husband), are both experienced actor/directors, very natural performers who courageously bare their bodies and souls to give this relationship their best shot. Both have an excellent ability to convey humor, heartbreaking vulnerability and crack comic timing.

The detailed set (Rosemary King) and varying lighting (Chad Oakley) enhance the proceedings considerably (thought the long, narrow stage at the theater makes Frankie’s apartment much larger than any New York low-rent flat would be). The New York accents may not be consistent, but the New York attitude is in full force.

For all its humor and bluster, the play delivers realistic characters, dialogue and emotions. And this wonderfully moving, touching production hits all the right notes.