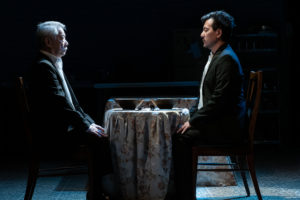 Food is culture. Food is family. And food, as everyone from Marcel Proust to playwright Julia Cho knows, can evoke deep and weighty memories.

Ray knows this intuitively. He’s a Paris-trained gourmet chef who has a special gift: he always knows exactly what food will go directly to the heart and soul of any given person, bringing them back to earlier, happier times.

But his father never cared for food in general, or Ray’s fancy food in particular. He likes it cheap and simple. Now Ray has walked away from his restaurant job to be with his father, who is already semi-comatose, unable to eat, and close to death. Because of his chosen profession (Dad thinks cooking is “women’s work”), Ray has had a fraught relationship with his father.

So far, so universal. But Cho’s delightful, slyly insightful play, “Aubergine,” is distinctly Korean (with a little pastrami thrown in).

During the course of a 2-hour series of short scenes, each of the five characters gets a monologue, stepping downstage to discuss his or her relationship to, and memory of, particular foods, and the seminal role that food played in their (early) life.

Ray (excellent Brian Kim), whose mother died when he was young, was raised by his stern, taciturn father. Now he’s cut off from his feelings – and from his girlfriend, Cornelia (charming, no-nonsense Audrey Park), whom he abandoned without explanation, but calls upon to help him converse with his father’s estranged brother in Korea (heartful and sometimes hilarious Yong Kim), who doesn’t speak English.

From each of these characters, as well as the African-born hospice nurse (solid, credible Terrell Donnell Sledge), who now grows his beloved eggplant (aubergine!) in a community garden; and a self-professed foodie inured to “gastronomic gallivanting,” who reminisces that her late father’s pastrami sandwich seemed “like a letter, addressed only to me,” Ray learns something about food as love, memory as healing, family as familiarity and bonding, and accepting death as an opportunity for self-assessment and awareness.

Cho’s language is often lyrical and poetic. Todd Salovey, associate artistic director at the San Diego Repertory Theatre for 28 years, brings warmth, sensitivity and a touch of magic to the proceedings. He’s gathered a superb cast, each one painting a compact portrait – kind of a line drawing – of who they are and what their happier times were like.

It was what Ray served her that made Cornelia fall in love with him. It’s his innate understanding of the power of food that convinces Ray to make the wild but simple soup his uncle exhorts (with a live turtle!), to encourage the older man to stick around a little longer.

There are segments of dialogue solely in Korean; a scene of communication breakdown between uncle and nephew is particularly amusing. The projected translations are handled creatively, and provide a source of humor when Cornelia takes liberties in translating (and re-conceiving) the sometimes harsh messages Ray sends to his uncle.

The set, costumes, lighting and sound serve the production well. Although death hovers over the story, food brings everyone what they want or need in the end. And that makes for a satisfying cross-cultural culinary conclusion.