“MARIE AND ROSETTA” at Cygnet Theatre 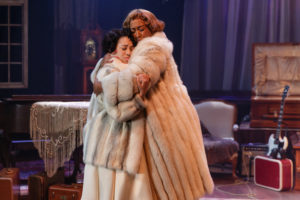 In recent years, more and more stories have surfaced (or been unearthed) about women whose significant contributions to life, science or society have been buried, lost or co-opted by men.

There’s also a long history of African American innovations – especially musical – that have been appropriated by whites.

This black, gospel-singing, bisexual woman from Arkansas was the first to use an electric guitar, swing her hips and play rock & roll – a field that was, and still is, dominated by men.

She has been recognized as an influence by Elvis Presley and Johnny Cash, Chuck Berry and Little Richard, Jerry Lee Lewis and Carl Perkins. She was called “the original soul sister” and “the godmother of rock and roll.” But her name was relegated to the dustbin of history.  Although she played to a stadium audience of 25,000, by the time she died in 1973 at age 58, she was totally forgotten, and was buried in an unmarked grave.

Since then, some folks have stepped up to try to make things right.

In 2007, Gayle F. Wald, an English professor at George Washington University, wrote a biography. In 2008, a concert was staged to raise funds for a grave marker. Shortly after the 100th anniversary of Tharpe’s birth in 2015, award-winning playwright George Brant wrote “Marie and Rosetta.” And in 2017, Sister was finally inducted into the Rock & Roll Hall of Fame.

“Marie and Rosetta,” having its local premiere at Cygnet Theatre, debuted in 2016 at the Atlantic Theatre Company in New York.

The play is set in a funeral parlor, in 1946 Mississippi. Sister Rosetta Tharpe, the first gospel recording star, has just met the woman who will become her protégé and collaborating partner (the extent of their personal relationship has been debated, but in the play, Rosetta is clearly intimating a desire for more than just a friendship), Marie Knight was performing at a Mahalia Jackson concert (or, as Tharpe called her rival, “Saint Mahalia”), and Rosetta was determined to snatch her up before Mahalia did.

Rosetta immediately invites Marie to go on the road with her. But first, she has to loosen her up, help her move her hips and find the sacred in the so-called profane of rhythm & blues as it meshes with gospel and jazz.

Times were tough in the South, and black people couldn’t go into restaurants or hotels. So, performers like Tharpe took whatever spaces they could get to perform – “a garage, a kitchen, a couch,” and not infrequently, a funeral parlor, which also provided a comfortable resting place for the night. Sister had a bus, but the driver had to be white (“Who else gonna buy us food?”).

Over the course of 105 minutes, we watch these two women come to a meeting of the minds – and the music. Each compromises a bit. Rosetta is more unconstrained and earthy (she swears repeatedly, but keeps looking heavenward and apologizing). Marie, who is much more “high-church” (though she, too, has endured an abusive husband), learns to free her voice, mind and body, and “have some fun,” as Sister puts it.

Marie branches out into boogie-woogie on the piano, while Sister moves from a steel-string acoustic guitar to a wild, rocking electric, taking gospel to a stomping, shouting crescendo. They even do a four-handed piano duet (that number is pre-recorded, but uncredited).

Brant’s structure for the play is intriguing and unpredictable. He wraps up the story in a fascinating way, while allowing us to learn more about what happened after these two first came together.

Requiring two skilled musicians as it does, this is a very difficult show to cast. Most other productions have all the music pre-recorded and mimed by the performers (including Off Broadway). But Rob Lutfy, Cygnet’s associate artistic director, has found two singer-musicians to rock the house.

Noël Simoné Wippler (Sister Rosetta) was trained and has been feted as a classical and jazz singer. Amaiya Holley (Marie) is a recent college graduate whose focus has been musical theater. So they each bring a different skill-set to the proceedings. It’s the instruments that sometimes get in the way. In perfectly embodying their characters, one exudes confidence; the other, diffidence.

Wippler is a lot more comfortable with the electric than acoustic guitar. Holley rarely looks up when she’s playing piano. But both have powerhouse voices, and they blend together well (music direction by Leonard Patton). But their sometime struggles on the instruments proves a distraction at times.

The singing is often too loud for a small theater, and isn’t well balanced with the musical accompaniment (sound design by TJ Fucella). The lighting (Anne E. McMills) varies nicely for the performances segments. Fortunately, there aren’t just snippets of songs, but full-on performances of signature numbers: “This Train,” “Sit Down,” and the more suggestive ”I Want a Tall Skinny Papa.”

Dramatically speaking, there could be more conflict; most of what there is centers on the contrast in musical styles. But the story is so good, and so important, that the sagging moments are superseded by the musical highlights —  and Sister’s raunchy humor and raucous ways. It’s high time she’s getting her due.