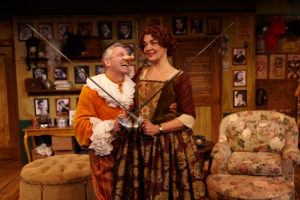 Ken Ludwig has written some wild and wacky comic stuff – which has won him two Olivier Awards in England and two Tonys on Broadway. He’s premiering a new comedy at The Old Globe this spring.

But though farce may be timeless, not all jokes last forever.

Ludwig’s 1995 “Moon Over Buffalo,” which was produced at North Coast Repertory Theatre 19 years ago, is back on that now-revolving stage.

In this goofball story set in 1953, a failing theater company, headed by two fading stars, has been relegated to touring the hinterlands, like Buffalo. Onstage and backstage havoc inevitably ensues.

The play still has a lot of very funny, farcical moments. Slamming doors, pratfalls, mistaken identity and other shenanigans abound.

But the references are so dated, most folks under 60 wouldn’t have a clue; even my over-60 friend didn’t know who Ronald Coleman was. It would also benefit theatergoers to understand the workings of theater, and know more than a bit of the Bard, since Shakespeare lines and quotes fly by at a furious pace. The more you know, the more you get the gags.

Then there is the highly unfashionable and un-PC ridiculing of American Indians, the physically disabled, the hearing impaired and gay men. Also, in these days of vehement #OscarsSoWhite protests, North Coast Rep should strive for considerably more diversity in casting.

All that being said, director Matthew Wiener, who’s proven himself to be a bona fide farce-meister, has marshaled a superb ensemble, including some heavy-hitters with impressive credentials.

Although there’s too much yelling amid the frantic and frenetic goings-on, each over-the-top actor has hilarious moments, and all have outstanding comic timing and physicality.  The second act is downright side-splitting, portraying as it does, every actor’s worst nightmare: being caught alone onstage, in the wrong costume, wrong play, with a missing scene-mate, having to ad lib, while staring into the audience with unbridled terror. Absolute comic gold.

The production is technically meticulous; the set and costumes are particularly detailed and inventive.

You could call this one a Funny Valentine to theater.