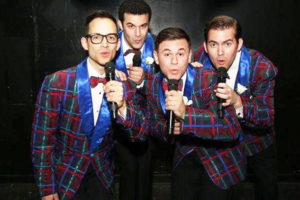 Funny thing about plaid. Every time the cross-stripe fabric waltzes out of style for a while, it somehow sashays back in. Same goes for “Forever Plaid.”

Now the tale of four nerds is back, a nostalgic reminder of the close-harmony guy-groups of the 1950s.

The Plaids were killed enroute to their first professional gig, in 1964 – hit by a bus of Catholic school girls on their way to see The Beatles on “The Ed Sullivan Show.” Now, they get a golden chance to return from the beyond, to perform that final, fateful concert.

Most of the 30 songs they sing in 90 minutes were corny even in the ‘60s, sung by the likes of Perry Como, Tennessee Erie Ford and The Ames Brothers. But that’s the shtick of the show. What do you expect from the high school A-V squad?

One part of “Forever Plaid” that anyone, young or old, can appreciate – is the terrific, tight harmonies. But now, nearly three decades after its premiere, “Forever Plaid” has some uncomfortable, un-PC moments that warrant a re-visit by original writer/director /choreographer Stuart Ross.

The show is onstage at the newly refurbished Welk Resort Theatre. The theater itself is unchanged, but the lobby has been spruced up and modernized, while still recounting the life-story of its namesake, bandleader and TV impresario Lawrence Welk. Instead of having a resident artistic team as before, the Resort seems to be hiring show by show.

This one was produced and directed by David S. Humphrey, himself a “Plaid” alum. His out-of-town cast has played these roles before. While their vocal and movement precision is flawless, only two of them carve out dimensional characters. As a group, they don’t have the crazy range of talent of some “Plaid” foursomes, but that fire-eating moment is amazing.

It’s great that the Welk is back in the theater business, after a yearlong hiatus. I hope it returns to hiring many local performers.