“A MAN OF NO IMPORTANCE” at the Coronado Playhouse 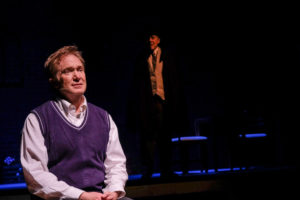 He may be just a Dublin bus conductor – but Alfie Byrne has the soul of an artist.

By day, he recites poetry to his passengers. By night, he puts his dramatic passions into a community theater group.

He’s enamored of fellow Irishman Oscar Wilde, quoting him liberally and communing with his ghost. He also has a dark secret he shares with the brilliant writer: the ‘love that dare not speak its name.’

Approaching middle age, Alfie remains closeted, unfulfilled and longing for love. His sister dotes on him, and his followers adore him. But he’s fairly exploding from the suppression of his secret.

Still, his creative juices keep flowing. His latest dramatic obsession is “Salome,” Wilde’s controversial 1894 tragedy about the Biblical woman who performs the Dance of the Seven Veils, then demands the head of John the Baptist on a silver platter.

One theater group member insists that the “dirty play” be shut down.

Alfie’s story, set in 1964, is a familiar but poignant one, first presented in a 1994 film titled, like the musicalized version, “A Man of No Importance,” though Alfie’s influence on his devoted friends proves he’s far more than that.

The stage show, by the acclaimed composer/lyricist team of Stephen Flaherty and Lynn Ahrens, won the Outer Critics Circle Award for Best Off-Broadway Musical in 2002.

Not every performer is at the same level of expertise, but the look is great, the accents credible, the humor is high, and under the direction of Manny Bejarano, some very compelling characters – especially familiar community theater denizens — are created by the 13-member cast.

Barron Henzel is outstanding as Alfie, and Jennie Gray Connard is comical as his exasperated sister. The offstage 6-piece band, led by music director/keyboardist Kurt Valles, brings warmth to the bittersweet Irish melodies.

The musical tickles the funny bone and touches the heart. The biggest surprises sometimes come from the smallest places.