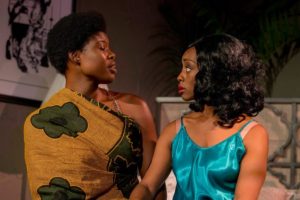 “Race is what I do,” African American playwright Lydia Diamond has said. “Race and gender, sexuality and class.”

Check, check and check. These issues reverberate throughout her 2002 play, “Voyeurs de Venus,” in addition to a heap of other subjects, including colonialism, victimization, objectification, exploitation and conciliation, punctuated by sex, gore, dance, nudity and a minstrel show.

The play, getting an excellent production at Moxie Theatre, under the assured direction of Delicia Turner Sonnenberg, is frankly overstuffed, making so many points and parallels, the central issues are defused.

A 21st century feminist academic, Sara Washington, is a cultural anthropologist who specializes in pop culture. She’s trying to write a book about the 19th century South African Khoisan woman, Saartjie Baartman, who came to Europe with a promise of wealth. Derisively dubbed “The Hottentot Venus,” she was exhibited as a savage, hyper-sexualized oddity, because of her amply endowed posterior and genitalia.

Sara is riddled with guilt and haunted by nightmares about her own potential exploitation of Saartjie and her story. Amid her episodes of angst, Sara betrays her white husband with her black editor and winds up compromising all her values.

Both women, the playwright seems to be saying, were motivated by greed, acting under contract and thereby complicit in their circumstances.

Although the piece is sexy, piercing and provocative, it’s also self-consciously over-intellectual, and sometimes contradicts or undermines its intended themes.

But the staging, lighting, costumes and 10-member cast at Moxie are superb. The marvelous Cashae Monya makes Sara a jumble of self-doubt and self-sabotage. Joy Yvonne Jones is sassy, smart and high-spirited as Saartjie; Cortez Johnson is suave and charismatic as Sara’s editor; and Justin Lang does antithetical double-duty as Sara’s gentle husband and the ruthless French naturalist Georges Cuvier, the so-called “Father of Paleontology,” who classified Saartjie ‘between man and animal,’ then bedded and posthumously degraded her.

The stylized comical, shocking or dance-happy dream sequences and subplots often confuse and confound rather than clarifying. Despite its underlying message of black resilience, the drama asks us to examine our own perceptions, while at times playing into some of the stereotypes it’s aiming to puncture or repudiate.