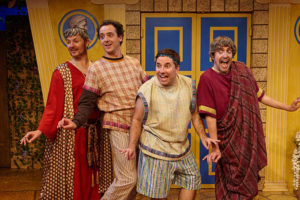 The term ‘slapstick’ may have its origins in the 16th century, but farces go back wayyy before that.

It was the farcical characters of the ancient Roman playwright, Plautus (251-183 B.C.E.), that inspired the wacky 1962 musical, “A Funny Thing Happened on the Way to the Forum,” which won five Tony Awards, including Best Musical and Best Book of a Musical (it was penned by two bona fide funnymen: Burt Shevelove and Larry Gelbart).

And it was, famously, the first musical for which Stephen Sondheim wrote both music and lyrics (he contributed only lyrics to “West Side Story” and “Gypsy”).

So, not a bad pedigree.

The story, nonsensical and convoluted though it may be, features character archetypes, such as the crafty servant/slave, the old lecher, ingenuous ingenues, a parsimonious finagler, and all manner of mishaps, disguises and mistaken identities.

In this case, the slave is Pseudolus (Omri Schein), who’ll do absolutely anything to win his freedom.

He gets his chance when his young master, Hero (Chris M. Kauffman), falls for the virgin, Philia (Noelle Marion), who resides in a house of courtesans run by the penny-pinching procurer, Marcus Lycus (arrogantly cowardly David McBean). Unfortunately, Philia has already been purchased by a pompous bombastic captain, Miles Gloriosus (Jason Maddy).

If Pseudolus can get the girl for Hero, he’s a free man. Endlessly cunning and canny, Pseudolus comes up with a lie, diversion or feint every nanosecond, to get the girl away from the captain and with Hero, and to avoid his senior master and mistress: libidinous Senex (Andrew Ableson) and dominating Domina (Melinda Gilb), who are away temporarily, and have left their servant Hysterium (nervous, nimble Kevin Hafso Koppman) in charge.

In the third house (cartoonishly colorful, whimsical, off-kilter domiciles designed by Marty Burnett), lives a doddering old man, Erronius (John Greenleaf), who is traveling the world in search of his two children, who were stolen by pirates in their infancy.

Sure, the women are either whores, virgins or harridans, but these are all stock characters who will be used again and again, in French and Italian farce, vaudeville, the Borscht Belt – and sitcoms.

The conceit of the musical is that the story is being performed by a theater troupe, so the actors talk to the audience, introducing the play and the characters – and those who will assume multiple roles (courtesans, eunuchs, and assorted others: Missy Marion, Amy Perkins, Luke H. Jacobs, and the supremely agile dancer, Jean Schroeder).

The first bit of musical business is to inform us that we won’t be seeing any tragedy this evening; that’s reserved for tomorrow. It’s “Comedy Tonight” (the show’s most famous number).

This is the largest cast (13) with the most Equity actors (10) in the sixteen years artistic director David Ellenstein has been at the helm of North Coast Rep. It’s also had the biggest advance sales.

Those early buyers knew what they were doing.

This show is a megahit.

It’s cleverly directed (Ellenstein), with impeccable comic timing (pratfalls, somersaults, chin-ups, chases and all), and magnificently acted, by a stellar ensemble of truly funny and vocally gifted performers. Every character is flawlessly cast, every performance a little polished gem.

Every one of the major characters (all eight of them) gets a big rollicking solo number.

Hafso Koppman, as the aptly named Hysterium, is hilarious in “I‘m Calm.” Likewise Maddy’s deliciously self-serving slice of braggadocio, “I, Miles Gloriosus,” and the clever comic quartet, “Everybody Ought to Have a Maid.” Gilb displays her prodigious chops as the imperious harpy, Domina, with a blazing condemnation of her distracted spouse, “That Dirty Old Man.”

Then there are the duets: father and son (Ableson and Kauffmann), considering the “Impossible” unlikeliness of each as a match for Philia. And the young lovers:  Noelle Marion’s delightfully ditsy Philia and Kauffman’s besotted puppy-dog innocent, Hero, in “Lovely.”

It may not be Sondheim’s best or most memorable score, but it couldn’t be better sung. And Colleen Collar Smith has provided some very playful and jocular choreography to complement Ellenstein’s perfectly-paced direction.

At the center of the maelstrom and mayhem, in constant, antic/frantic comic motion, is the spectacularly side-splitting Schein, a marvel of physicality, outrageous facial expression and powerhouse vocals.

The behind-the-scenes four-piece band, under the musical direction of keyboardist Ron Councell, sounds three times that size, and keeps things moving along with alacrity.

Elisa Benzoni’s costumes are a multi-hued, imaginative array of Roman(esque) styles. Peter Herman has worked his usual magic on the hair and wig design. The lighting (Matt Novotny) and sound (Aaron Rumley) clarify and enhance the proceedings.

There is absolutely everything to like here —  unless you’re not a fan of farce; in that case, stay away, though you may regret it.

For anyone who needs a good guffaw (and don’t we all, these days?), this show is flat-out fun-filled and fantastic.