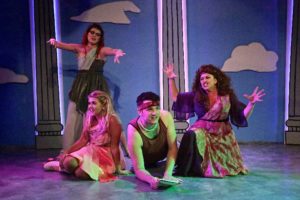 Just how cheesy can you get? “Xanadu” has the ostentatious answer to that musical question.

The 2007 musical (a parody of the airheaded, feather-light film  of the same name) boasts a wacky book by playwright Douglas Carter Beane, and original direction by our own Christopher Ashley, artistic director of the La Jolla Playhouse, where he brought it, direct from Broadway, to launch the national tour in 2008.

The show  has a long and complex history.

The ooey-gooey 1980 movie, which was nominated for six Golden Raspberry Awards (antithesis to the Oscars), won just one Razzie (for Worst Director) but subsequently became a cult classic. It was inspired by the 1947 Rita Hayworth film, “Down to Earth,” a sequel to the 1941 movie, “Here Comes Mr. Jordan,” which was an adaptation of the play, “Heaven Can Wait,” by Harry Segall.

All those incarnations add up to a surfeit of silliness. But when it’s done right, with tongue planted very firmly in cheek, with leg-warmers and headbands, mirror balls and roller skates, not to mention costumes and settings ranging from ancient Greece to Venice Beach, it somehow becomes totally irresistible.

And OnStage Playhouse gets it perfectly right. Despite its lofty aspirations, the goofball piece snuggles felicitously into a cozy, intimate space.  (But is sometimes-finicky amplification really necessary in such a small space?)

Director Teri Brown, along with choreographer Patrick Mayuyu, have pulled out all the stops in maintaining a wink-nudge, ‘this-is-so-tacky-let’s-celebrate-it’ sensibility. Everything is so deliciously over-the-top, and so gleefully flashy-trashy, it becomes 90 minutes of nonstop laughter.

The moves are downright hilarious, and the outrageous costumes (phenomenal work by Ryan Dietrich – who’s very funny in multiple roles — and that wardrobe-whiz Pam Stompoly-Ericson) complement the mostly excellent singing. The hair and makeup (Teresa Craven) are pretty rad, too.

The four-piece band, under music director Martin Martiarena, nails the sound of ‘80s bubble-gum pop songs  like “Whenever You’re Away from Me,” “Have You Never Been Mellow,” “All Over the World” and of course, the title tune (the movie’s music and lyrics were by Jeff Lynne and John Farrar, who added two classic Electric Light Orchestra numbers for the musical: “Strange Magic” and “Evil Woman”).

Towering Joshua Tyler Powers (6’8” when he’s NOT on roller skates), has the ideal clueless/stoner mien for Sonny Malone, the somewhat unfocused Venice Beach street chalk-artist who dreams of creating an all-arts venue of the highest order: a roller disco.

Enter the muse of history, Clio (delectable Olivia Berger, as funny and vocally gifted as she was in “Heathers the Musical” last year at OnStage). For some unfathomable reason, she has taken on the persona of Kira, a resourceful, Aussie-accented roller-skating helpmate who, though she’s a daughter of Zeus, and therefore a demigod, falls head over heels (or, wheels) for Sonny while opening doors for him to realize his artistic fantasy.

Her envious, scheming sisters  — Melpomene, muse of tragedy (marvelous Debbie David), and Calliope, muse of poetry (delightful flaming redhead Roxie Peters) – think they’ve created all the havoc, casting a spell that makes their sibling fall for the mortal. But it turns out, this really is true love, so maybe Clio won’t be condemned by Zeus to eternal damnation in the netherworld.

But wait, there’s more. It turns out, the owner of the rundown space Sonny covets – auspiciously named Xanadu (“the sign – it’s a sign!” says Kira, ingenuously, in her exaggerated Australian drawl) — is Danny McGuire (Todd Sutton), a jaded real estate predator who used to be more artistic and loving, and fell for Clio (then masquerading as ‘Tangerine’) decades ago, before he lost his way and descended into the gutter of greed.

When all the identity disclosures are made, Danny gives Sonny the space for free, and becomes his partner in the roller disco venture, we take a trip to Mt. Olympus, where we meet ‘Father”  Zeus (Sutton) and his wife Hera (malleable Doniella Sebastian, who also plays Eros, a Siren, an Andrews Sister and Erato, muse of lyric poetry), the goddess Thetis (amusing Jovi Olivas, who’s also Euterpe, muse of music) and the sex-and-beauty goddess Aphrodite (Peters) — but not before we’re gobsmacked by a Centaur (Seejay Lewis, side-splitting in all his characterizations) , a Cyclops (Dietrich), Medusa (David)  and Pegasus, the flying horse (another design triumph, along with the Centaur, by Dietrich and Stompoly-Ericson. I would cheerfully wear ANY of the glitz-glam outfits in the final scene).

Of course, love conquers all in the end. We go out clapping and smiling, the cast seems to be having a blast … and a hoot of a good time is had by all.