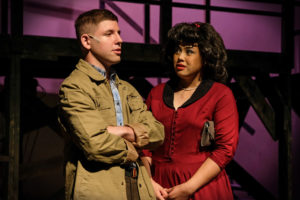 The malice of the premise is offset by the sweetness of the romance.

As laid out in the 1991 movie that inspired the 2012 musical, “Dogfight” is a nasty, misogynistic prank played by Marines for generations. The guys chip in money to rent a club or bar for a party. The remaining cash goes to the winner:  whoever brings the ugliest date. (“The game ain’t over till the fat lady barks”).

Eddie Birdlace (appealing Adam Sussman) is about to turn 21. It’s November 21, 1963, the eve of the JFK assassination, after which a lot will be lost in America – not least of which, its idealism and sense of self.

The same will happen to Eddie, who ships out from San Francisco to Vietnam in the morning. A gung-ho ‘Semper Fi’ Marine, he enthusiastically signs on for the Dogfight. When he stumbles upon Rose Fenny (beautiful-voiced Sara Ah Sing, in a wonderfully nuanced performance), a shy, warm-hearted, self-effacing waitress and closet singer/songwriter, he sees, at first, his perfect date for the evening. But as he gets to know her, he has second thoughts. He tries to dissuade her from going to the party and from dancing with him once there (that’s when the judging happens).

He and his best buddies (Kyler Waitley, Connor Boyd) can’t wait to get to Southeast Asia and flaunt their bold virility. But Eddie learns harsh lessons – while there, and when he returns, to a lot less than the “Hometown Hero’s Ticker Tape Parade” they’d all fantasized about.

The Dogfight scheme serves as an extension of the objectification and dehumanization  of military training. But Eddie gets a hard-knock lesson — when Rose decks him after finding out the real reason for the party.

He learns even more about himself from Rose, who brings out his long-buried sensitivity and warmth. She turns out to be stronger than she first appears. This may be her first date (Ah Sing is terrific in the pre-party what-to-wear song, “Nothing Short of Wonderful”), but she sees what she wants and, in many ways, she makes it happen.

Director Teri Brown (former long-term artistic director at OnStage Playhouse) brings her own edge and angle to the unpredictable book by Peter Duchan and remarkable score by Benj Pasek and Justin Paul, a foreshadowing of their later work on “Dear Evan Hansen.”

The 13-member cast is mostly capable, but the night I attended, there were occasional off-key moments in the men’s group numbers. Still, music director/conductor/pianist Nina Gilbert did an excellent job overall with the singers and the 6-piece onstage band, though the miking and sound balance were inconsistent at times.

The bi-level, wood platform set (Karl Bunker) is well-used, and well-lit (Xavier Luevano). The choreography (Patrick Mayuyu) is effective, and the costumes (Pam Stompoly-Ericson, Ryan Dietrich) are spot-on. Danica Waitley deserves mention as Marcy, the wisecracking, world-weary hooker who spills the beans to Rose. In vastly different ways, she and Rose take charge of their own lives, which is apt in a show set on the threshold of the women’s movement.

“Dogfight” is an unexpected pleasure and eye-opener.