“AN EXPERIMENT WITH AN AIRPUMP” at Backyard Renaissance Theatre 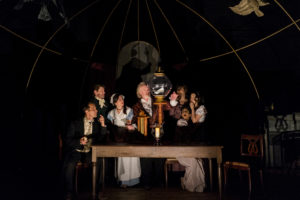 Dualities and dichotomies. Homage to a painting and to a prior play.

“An Experiment with an Air Pump” by English playwright Shelagh Stephenson, was inspired by a provocative 18th century work of nearly the same name by British painter Joseph Wright, as well as by the celebrated century-spanning Tom Stoppard drama, “Arcadia.”

The piece toggles between 1799 and 1999, each at the dawn of a new era. The same cast members play contrasting characters, who represent either passion or objectivity in the face of progress and scientific discovery. Revering the past or envisioning the future. Emotion clashes with erudition, love with logic. These conflicts and obsessions can tear a family apart. The two households are linked by a mystery.

Various types of relationship span the centuries: false and fickle love, mature and dismissive love. Class and age distinctions are underscored. Women’s quest for equality is repeatedly confronted and tested.

Stephenson has a lot on her mind – maybe too much for one play. There are extended, didactic disquisitions – on the painting, the science behind the vacuum pump and pre-embryonic research; philosophy, religion and the metaphysical.

Backyard Renaissance Theatre, in its earlier incarnation, originally produced the play in 2004, just five years after its London premiere. This revisit features an exhilarating ensemble. There’s a wide range of accents, some more consistent and intelligible than others, but the acting is uniformly first-rate. Consummate director Richard Baird has brought this stubbornly cerebral play to pulsing life.

It’s a delight to have Lamb’s Players Theatre’s Robert Smyth as paterfamilias, and Susan Angelo is his perfect foil. Justin Lang and Francis Gercke represent the more and less ethical sides of medicine. And Jessica John gives a heart-rending performance as the hunchbacked Scottish servant who becomes the fulcrum of the piece.

Even the design invites analysis, with its huge dome framework, suggestive of a planetarium, a cage or an operating theater. The action is beautifully lit, and the period- and character-defining costumes are well-chosen.

The power of “Airpump” is its human interactions, but it also invokes contemplation and discussion.